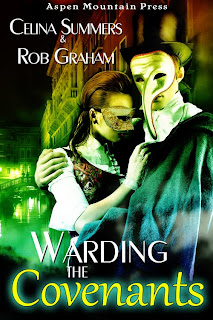 When Marcellin Dautin is named the Elder of Venice, fledgling vampire Marguerite and her husband Gunther agree to accompany him in hopes of learning more about the Russian revolt against the Conclave of Elders. After an ancient renegade vampire murders the Doge, they are drawn into a dangerous hunt for the assassin.

But as Marguerite's powers grow, so too does the danger. Some vampires oppose Marcellin's rule over Venice, the renegade has begun to stalk Marguerite and her old Russian enemies are determined to capture her and the Elder's sword she bears. While Venice dances through the Carnivale season, Gunther must lay aside all restraint to protect his young wife. Can they remain true to the Covenants they've pledged to preserve or will their love shatter under the strain of Warding the Covenants?

I totally love that cover and I'm completely excited about the release of this new book.  I think you'll all enjoy it a lot; I hope you will.
In other news, I got Lizzie T. Leaf's second round of edits to her and spent the majority of the afternoon working on a project that I can't tell you about until sometime next week.  Funny how that works.  Then I got another 7k written on Terella and spent the rest of the day working on things for the convention.
I am almost to the point where I'll be glad when the convention is here.  I'm really looking forward to it--mostly because all the work will be done at that point.
on April 18, 2010