I saw something very unusual today and I thought I'd share it with you.

My mother in law and I were on our way to lunch when we saw a whole mess of flashing lights on Memorial Drive, which is the main thoroughfare through Lancaster, Ohio which is were I live.  My mother in law, noticing that the police had blocked off the entire road, turned onto a side street, went a couple of blocks up and started on a path parallel to the one we were originally taking. We hadn't gone two blocks when a patrol car pulled into the intersection one car ahead of us, lights flashing, and stopped.

My first thought was that there was some kind of dangerous situation. And then, I saw the first fire truck, draped with black gauze buntings and with a firefighter's protective jacket on the front grill and I knew what was happening.

On January 2, firefighters in Lancaster responded to an apartment fire. While supervising the crews battling the flames, Lt. Joseph McCafferty collapsed.  He was taken to the hospital, and eventually passed away on January 16. He was only 59. He was the first Lancaster firefighter to fall in the line of duty since the days of horse-drawn fire engines.

What we were witnessing was his funeral cortege.  And even then, it took me a few minutes to recognize the magnitude of what was happening in front of me. 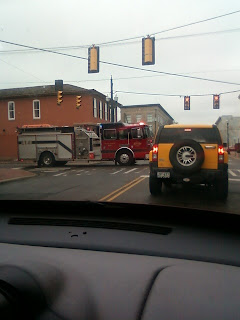 The funeral procession, including the fire engine that carried Lt. McCafferty's casket, stretched a mile in length.  It was comprised of fire engines, ambulances, emergency squads and fire chiefs from all over the state of Ohio--some from as far away as Canton and Dayton. All along the funeral route, flags were lowered to half staff--not only at government facilities but also in the front yards of private citizens.

Those private citizens also lined the streets.  School kids watched in front of their schools.  Police officers who were cordoning off the route stood at attention and saluted.  The cars before and behind us all shut off their engines--and so did we.  And we all watched as fire truck after fire truck passed in front of us.  The fire chiefs in their red-painted cars looked out at us, rows of gold braid striping their sleeves. 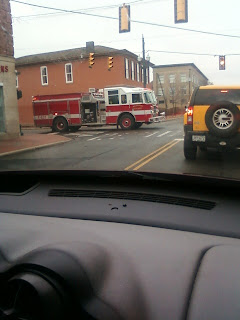 There was a store on the left corner of these shops with a big display window, and the store employees stood in a row, witnessing the procession from indoors. And still the fire trucks kept coming.  Some of the firefighters I saw were older men, salt and peppered hair brushed back neatly.  Yet others didn't look old enough to drive much less drive a fire truck or carry people out of burning buildings.  While there were many trucks from Lancaster and I saw lots of firemen I know, the majority of them were from other counties.  They couldn't have had more than a passing acquaintanceship with Lt. McCafferty, but still they came to pay their respects to a man who'd literally given his life in the course of doing his duty. 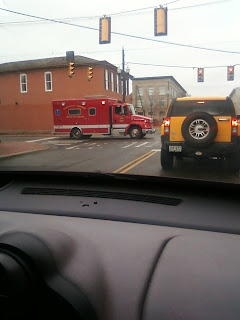 The last time Lt. McCafferty had seen a rescue squad, he was a patient. Now they drove behind his casket to honor him. It got me thinking.  We all remember (and probably always will) the incredible courage and gallantry of the first responders in New York City on 9/11.  That bravery is now indelibly tattoed upon the men and women who serve in our fire departments or police departments all across the country, no matter where they serve.  It doesn't matter if it's in a huge metropolis like NYC or a small town like Lancaster, we still look at our first responders the same way, a way that has changed since 9/11 and strengthened our respect for the people who risk their lives in order to save ours.

Lt. Joseph McCafferty didn't die while rescuing people from a burning building.  He wasn't shot by a criminal. But still, his death is tragic.  He is not a hero for how he died.  He is a hero for how he lived.

The local newspaper, the Lancaster Eagle Gazette,  related the final tribute to Joseph McCafferty in their article this afternoon about the funeral. The 911 dispatchers sounded the tones for the fire department three times.  Three times they called for Lt. Joseph McCafferty.  Three times, they received no reply.

Finally, the dispatcher said, "For all fire personnel, this will be Lt. McCafferty's last call."

Rest in peace and good voyage to you, sir.