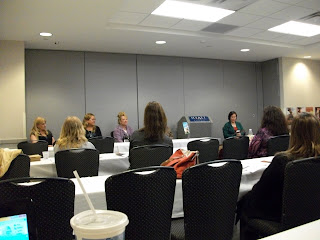 The authors' panel at Bobbi Smith's workshop.  From the left, that's Heather Graham, Debra Parmley, Linnea Sinclair and Jade Lee. I tried to get a shot of Stacey Kade (who is sitting next to Linnea) but just couldn't  get a shot around that head in the way. 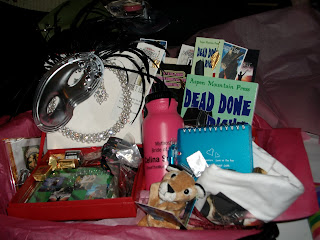 This is the gift basket that Lizzie T. Leaf, Sam Cheever and I contributed to for the booksellers at the convention. 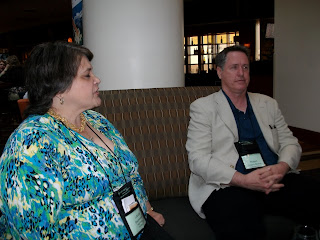 Laura Baumbach talking with Robert Gregory Browne at "our" table in the bar.  We chose the table for two reasons: first, it was right by the elevator banks and second, because it gave us an unadulterated view of our banner.  Both Laura and Robert are great people to talk to--and drink with...not that I would know... 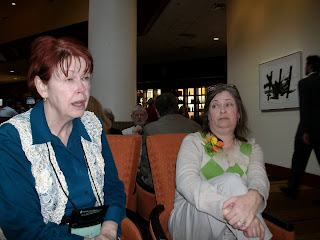 For some reason, Lizzie T. Leaf (on the left) and Sandra Hicks didn't want this picture to be seen by anyone. *grin*
So naturally, I had to post it.  I think it's funny and I'm not sure how many hurricanes and glasses of wine we'd had by this particular point in the evening. 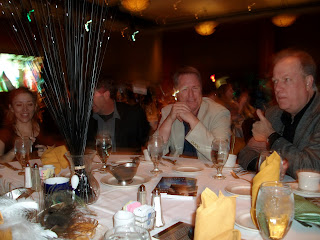 "Saving the boys"
The Faerie Ball was a lot of fun, but we were considered a safe haven for Bret Battles, Robert Gregory Browne and Jason Scott Bell after the strip show the night before during Ellora Cave's Red party. (The male dancers didn't actually strip, which was a bummer, but the boys weren't taking any chances)  That's Cynthia Vespia on the left. keeping them entertained.  All three men were fabulous people and fantastic writers, and I've added Jason's The Art of War for Writers to my reference shelf. Outstanding book about writing--I recommend it highly. 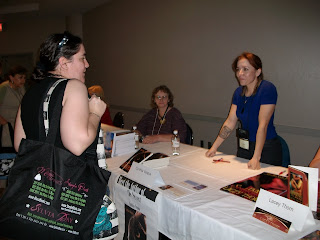 Another picture of Cynthia Vespia, who was signing copies of her book The Crescent at the Thursday Book Expo. Female gladiators!!! Let me repeat that--female gladiators!!!!! Cyn's books are a hell of a lot of fun--but I knew that already from reading her Demon Hunter series. 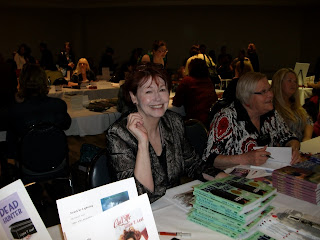 Lizzie T. Leaf, looking absolutely gorgeous as she prepared to sign copies of her book Dead Done Right.  I edit Lizzie and she's one of my favorite writers to work with. 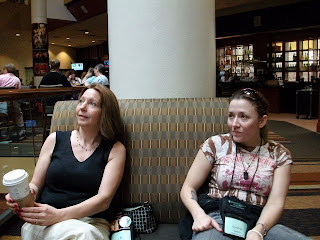 Another of my favorite writers that I edit--that's the glorious LB Gregg on the left, sitting next to Cyn at the AMP bar table. If you look closely, you can see our banner over LB's right shoulder. 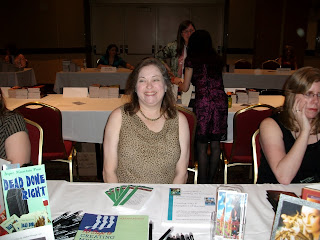 Lucynda Storey, my fabulous editor for the Asphodel series, at the Friday book signing.  That's my Mythos 1: Bride of Death cover in the lower right hand corner.  We all switched up on the promo items, mixing and matching them all week for greater AMP exposure--one of the great benefits of working together as a group to promote each other. 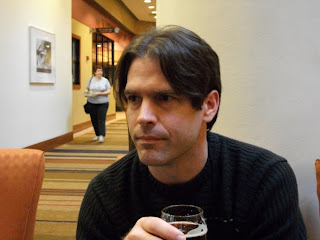 And this would be my husband Shannon, looking adorable and pretending to listen intently before he kills off that Killians in his hand. As far as I was concerned, Shannon won "Husband of the Convention" honors for always double-checking--and sometimes stocking--my promo lane display as soon as he arrived at the convention each night. It didn't take long for the other AMP ladies to learn to appreciate my husband either. By the end of the week, he'd been thoroughly spoiled by all of them.
If anyone else has RT pictures they want to share, just drop me a line!  Because, you might have noticed, there's something missing in all these pictures--me. *grin* Not that it was intentional or anything.
on May 06, 2010 No comments:

Email ThisBlogThis!Share to TwitterShare to FacebookShare to Pinterest
Labels: A Month In The Life, RT convention

Yep--you get an extra day in this month because this whole past month has been about the Romantic Times convention and this was the last day of it, at least for me.  So May Day was spent  dancing around the flower laden pole that is a book signing at a major event with major authors.

No, I didn't get to sign.  I got to watch and take pictures and run errands, which was total awesomness from my point of view. First off, I was in sneakers and jeans--sheer bliss after five days of misery. I'd determined from the beginning that while I would love to have every single darn book in the ballroom, I had to restrict myself. So I kept to books from writers who'd been especially helpful and/or friendly throughout the week.

First off, then, was the lovely and simply loveable Bobbi Smith.  Aside from hosting and directing the two-day pre convention workshop that was the most helpful event I've ever attended as a writer, Bobbi has one of those absolutely incredible personalities, the kind that makes you believe you can go out and do exactly what she believes you can do. I would happily spend a week or two brewing her coffee and taking phone messages for this woman--and I honestly believe I would learn more doing that that I did in four years of writing classes at college.  She's one of my new idols. 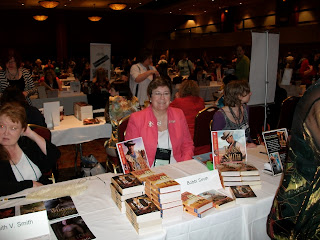 Isn't Bobbi beautiful? I wish I could wear that color pink, but alas!  Too much red in this redhead's hair.
Next on the list was Linnea Sinclair. I really bonded with her and Stacey Kade during their workshop on how to stay inspired, and bonded even more with Linnea when the subject of scam agencies and vanity publishers came up in the author's panel.  She writes kick ass science fiction with kick ass heroines--not hard to understand at all since she's a kick ass kind of gal herself.  It's been a long time since I've dipped my toes in the sci fi pool, and Linnea has convinced me to do it. I can't wait to read her book. 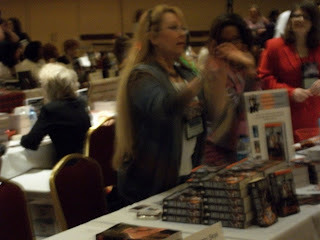 See what I mean? Linnea is an absolute firecracker!
I have to admit, by the end of the week I felt like a Misery-esque number one fan of Jade Lee.  Her characterization workshop completely changed the way I look at my characters and if it weren't for her advice on pitches during the authors' panel, I would never have gotten the requests I did.  But all that aside, it's really hard for me not to totally dig a chick who's as smartass as I am, writes the kind of fantasy I love, seems to have a similar outlook on writing and speculative fiction as I do AND who used my promotional document stands all over her table at the booksigning. It would be the equivalent of Albert Einstien using my abacus to demonstrate the theory of relativity and I totally ate that up.  Here's Jade in one of her more serious moments: 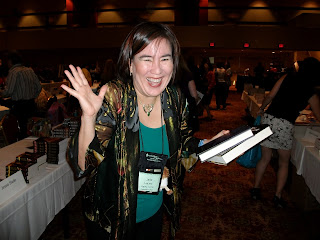 One of my favorite new acquaintances during the entire convention, and once I got over being totallyu gobsmacked by even talking to her, I felt like I'd known her forever.

These pictures, by the way, took place before the doors opened.  After they opened, I wasn't able to get any more great closeups and was barely able to get any books.  Why, you may ask?  Well, because there were at least 3,000 people streaming through the doors as best I could tell.  It got to the point that it was so crowded that it actually hurt to turn to one side and avoid running into someone--which, I might add, very few people other than me and Cynthia Vespia were that worried about.  We did creep upstairs to get a few shots of what the book signing looked like from above. This might help you understand. 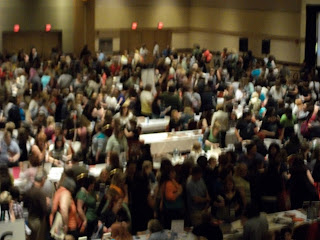