Theater of Desire is the book where everything starts to change. You know as well as I do that any twelve-book series can't have everything go on without new conflicts and challenges and alliances. One person in the world has an idea of what happens in later books--my beta reader, Marguerite Butler. I've edited her since the late 2000s, first at Aurora Regency and then at Musa. She's beta read almost all my books, and she's the only person I discuss future plot points and character arcs with. She sent me some memorable hate mail when I killed one of her favorite characters off in Asphodel, and I still torture her about that.

AND she has a fantastic blog that I'm addicted to at https://cowtowncrime.com/. Cowtown Crime is a true crime blog and I'm addicted to it because in the other series I'm working on, I deal with a lot of criminal stuff and the way she writes about legitimate true crimes really helps me to see how to present my fictional ones. The blog doesn't read like a boring recitation of stats and facts. The blog reads like fiction. You should check it out. It's addictive.

She's the only person on the planet who knows what my ultimate goals were for this series. I'm experimenting with a character arc that's extremely difficult to make work--you know...just to see if I can pull it off--and whenever Marguerite gets riled up about something I'm planning to do to a character/characters, I know I'm on the right track.

She's been riled up a lot about Harlequinade.

But this time, I've done something different with poor Marguerite. She read the first phase of Harlequinade, but not the second or the third. She has sort of an idea what happens, but nowhere even close to knowing how things end up. I didn't give her the later books to read. She has to wait, just like everyone else, so she's stayed riled up.

I love riling her up. Gives me purpose.

Here's the thing. A relationship with a good beta reader provides an author with the feedback they need to push the boundaries. If a writer spews out formulaic stories where everything that happens in book B happened in book and will happen in Book C, a beta reader isn't challenged. They're happy because they're reading what has already worked for them before. But if you don't write formula books...if you experiment with storylines that are dangerous (ie--read: DIFFERENT) then your beta readers are challenged. They have to shift their points of view about you as an author and they never know what to expect. A good beta reader wants to be challenged. They want to be riled up. When a beta says something like, "Oh, but this was so different from *insert name of last book*. It's not what I was expecting." then you probably need a new beta reader. If your beta reader's feedback is always some variant of, "Oh, this was so good! I love it just as much as *insert name of last book*. I knew she'd pick option A over option B." then you probably need to re-evaluate what you're writing.

Challenge your readers. Don't hand them a book where they know how it's going to end when they open the book for the first time. Because if you challenge your readers, you're challenging yourself as a writer and that's exactly what you need to be doing. And remember, always, that a beta who says nothing but "This was so good. I loved it!" to every book you write isn't helping you. Betas are supposed to give you an honest critique of your work, both good and bad, and if they don't give you valid criticism then they're not fulfilling their purpose. Marguerite can love everything about the story or the characters or whatever, but she's not going to let one of my manuscripts slide without pointing out my writing tics (pet phrases or words) or plot issues. She knows that what I really need is the criticism. Her eyes are the first ones on the manuscript, and I rely upon her to give me an honest, valid critique. Because when she gives me an honest critique and then gets riled up about a plot point but still loves the story, I know I've done my job.

And so has she. 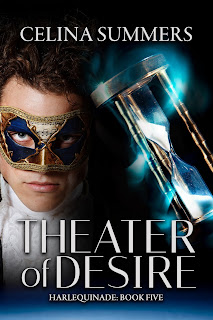 At any rate, phase two of the Harlequinade begins today with Theater of Desire, so it's a good time to warn everybody that this is the book where everything begins to change. It's also a good time to give you some new insights about the series and how it came to be.

So let me tell you a few secrets about Harlequinade.

First off, yes--it's a legitimate twelve books in twelve months series (although there's a prequel that will come out in 2019 at some point). All twelve books clock in around 100,000 words. All twelve books were professionally edited (not by me) and designed (also not by me). All twelve books involve real magic:the world of the theater, and real fantasy magic: time travel, empathy, and a set of immortals who would do anything for ultimate power but are restricted from open warfare by the very strict rules of their game. If an immortal violates those rules, he is instantly obliterated by the ruthless magic of some unknown agency. The deeper into the series you go, the more magic there is.

Third, this series was shopped by my former agent for several years to traditional publishing houses. Every rejection started to sound the same after a while. I'll just give you the Cliff's Notes version: "I love this, love the writing, love the characters, love how different this is--BUT we don't know where to shelve it, so we're going to have to regretfully pass." I'm used to those kinds of rejections at this point. And I don't foresee writing anything that's going to meekly fall into the categories everyone expects. I like to write things that are different and that challenge the reader. So I doubt that ever changes.

And finally, I leave you with a tagline for the remainder of the series. Have fun trying to puzzle it out.

When I was trapped in the ruins of Desire, Time extended his hand and set me free.

Y'all have a great weekend. GO GET MY BOOKS!