What We Saw In Louisville Today

So I'm actually going back to the topic of Muhammad Ali, because something extraordinary happened today in Louisville.

I'd planned to road trip to Louisville for today, actually, but the husband vetoed the idea because I'm currently on bed rest. Which, if you think about it, makes me pretty damn pathetic. Ali would never stay down on the mat. He said it wasn't the place for a champion--a sentiment I agree with.

But now, I'm glad I stayed at home because I was able to witness something absolutely unprecedented in the streets of Louisville, Kentucky. A funeral cortege for a man who transcended athletics also transcended into a moment of rare unity and celebration in an American city that was witnessed throughout the world. I spent the past four and a half hours chronicling the events on Twitter and during that time interacted with people all over the place--people of different races and ages, affluence and religion. I was talking with a writer friend of mine who was watching it on the BBC in Scotland.

For this one day, politics and social unrest were suspended as the people of Louisville came together in a display of such pure, heartbreaking singularity to share the Champ's last journey through his beloved hometown.

Today was unprecedented in my lifetime. Many celebrities and athletes and artists and politicians have fallen and been revered by this country. But not like this.

Crowds lined the streets, tossing flowers at the hearse, chanting "Ali! Ali!" Traffic across the eight lanes of I-64 came to a dead stop as the cortege passed by. Men and women of every possible social identity ran into the street to touch the hearse, to press a kiss against the window. to honor a man who meant so much to so many.

As the cortege passed by the Ali Multicultural Center, it paused to bring the eyes of the world onto a place that was special to Ali's heart not only because it honored him, but because of the amazing outreach work it does. People were crammed up against the barricades, holding up their kids, calling his name, cell phones or cameras in their hands.

But when it passed through the streets of Louisville, passing the places where Ali walked as a young Cassius Clay, the whole event became something I never expected. It started with a group of young men whose parents probably were too young to have seen Ali fight live, jogging beside the hearse for blocks in the sweltering June sun. One young man in particular must have stuck with it for a couple of miles--the dude in red refused to give up until the crowd grew too large. Flowers pelted the windshield--most of them red, but then blossoms of all colors--like the people who threw them, of all colors. Older white men ran up to touch the hearse next to young black guys without notice or fear or even a look of suspicion.

Turns out that the past week in Louisville, the rate of violent crimes has dropped significantly--a silent, unplanned homage to a fighter who preached peace.

In Ali's childhood neighborhood, an honor guard of Louisville police officers walked on either side of the hearse, but never interfered with anyone approaching the hearse with flowers plucked from their gardens or just to touch the slow-moving hearse and walk away. Considering the celebrities in that cortege, it could have been the direct opposite and probably would have been in any other American city. But this was Louisville saying farewell to their own, and no one dreamed of thinking someone was going to whip out a gun and point it at the famous people in the limos. In fact, the Ali family rolled down their windows, waving to the crowds, taking flowers offered to them by perfect strangers, welcoming the outpouring of love for their patriarch. What an amazing display of coordination and respect on the part of the family, the police force, and the city of Louisville.

And people who yesterday wouldn't have spoken, shared their memories of the Champ today without hesitation or judgement. Tomorrow, their suspicion and distrust might return.

There were kids--young kids--sitting on top of their parents' cars chanting "Ali! Ali!" Kids who could only have had the faintest idea who Muhammad Ali was as an athlete, and won't know for years what he is as an icon. It was a 21st century American reprise of the Congo. "Ali bomaye! Ali bomaye!"

How he would have loved it.

And then all of a sudden there were more people running beside the hearse. Not the media, but old men and young men, white and black and every shade between, Christians and Jews and Muslims--running together in amity and accord. Two young men cruised beside the hearse on hoverboards--HOVERBOARDS, for pete's sake, a vivid reminder of the incredible events Ali's life has spanned.

And with them ran a young black man in a white hoodie with a gold lame' stripe--no camera, no flowers--a young boxer, running beside the Greatest with his gloves on and shadow boxing like his idol had.

When the cortege neared the cemetery gates, a huge crowd of people was gathered for that final turn to lay Ali to rest. The driveway was covered with flowers, and the people were chanting, holding up signs, weeping openly. A man ran up and threw an Islamic flag over the right-hand side of the hearse windshield, and a cop moved it with such respect and care over the top of the vehicle--a moment that just does not happen in the America of today.

I've had several...we'll call them discussions with friends and unknowns alike on social media this week because I unabashedly claim Ali as an idol of mine--a man who symbolizes for me the moments that made me love the world of sports from the time I sat on my dad's knee during the unparalleled fights of the 70s to the lighting of the Olympic torch in the Atlanta 1996 games to the Ali who, although silent and shaking and slowed by Parkinson's who continued to use his influence to raise money for charity, to soothe political turmoil, and to advocate for peace. One of my particular friends, Rich from Atlanta (whose good opinion and thoughts I value almost above anyone else's), argued quite truthfully that Ali's treatment of Joe Frazier was shameful--which it was. Veterans from all kinds of American wars dismissed him as a hero and called him a draft dodger--totally their right. I can't argue with their points of view because they're right.

But I said and did many things at 25 that made me cringe at 45. And as Ali progressed through his life, and that incredible mouth was silenced, he found ways to make his voice heard throughout the world. And the impact from that resonated today in Louisville.

We don't have funerals like this in the States. The closest thing I can compare it to is Princess Diana's funeral. But where that was tragic and sorrowful, Muhammad Ali's funeral procession today was more than that--sorrow and joy intermingled, and for one perfect, beautiful early summer day in Louisville, the barriers of race and religion he fought to destroy collapsed beneath the weight of a unity and purpose that he would have appreciated so much.

And so now, the Greatest is truly gone to his rest. I have this mental image of him looking down on his hometown right now, and although his soul can speak and move and fight without a tremor now in whatever joyous afterlife he's earned, he is still. Quiet. Humbled at last because the whole convoluted, controversial, single-minded purpose of his life spread like a benediction over the city he loved today, proving at last that my favorite Ali quote is unequivocally true.


I wish people would love everybody else the way they love me. It would be a better world.--Muhammad Ali

Today, in Louisville, it was a better world. Because all these people came together out of love for Muhammad Ali, today they learned to love each other a little better.

If we truly wish to honor this man, we should do all we can to make this day turn into weeks, months, years, decades--an Ali peace to wrap across America at last. 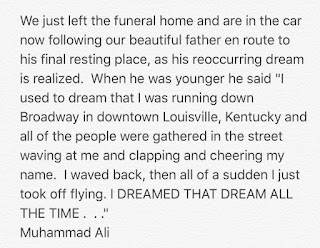