So...Let's Talk About the Harlequinade's Life History in Publishing 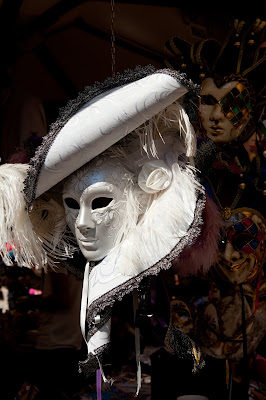 A few people in the world have read some or all of my Harlequinade series. Many of those people are NY editors at Big 5 houses, and from most everyone who's read one or more of the books I have gotten seriously mixed signals.

Let me catch you up. The Harlequinade series is set in a world where American professional theater meets urban fantasy/horror--kind of like Something Wicked This Way Comes had a love child with The Phantom of the Opera. It's a serious genre mashup with elements of horror, paranormal romance, urban fantasy, historical fantasy, time travel, and literary science fiction. The first book in this series, Theater of Seduction, won an award at RT, landed me my awesome agent, and managed to bulldoze its way through numerous publishing departments only to be killed off after multiple reads. The feedback I did receive was a variant of the following:

Don't know where we'd shelve it.

--and my personal favorite:

Chapters are too long.

Don't get me wrong. These are all legitimate criticisms from editors I don't know and some very good friends as well. As anyone who follows me knows, I am absolutely incapable of writing something uncomplicated. So these points are certainly valid, particularly as literature is a very subjective field from top to bottom.

Is it any wonder that my forehead is permanently flat from banging it into my desk? In fact, the very first Big Five house (probably THE Big Five house in my opinion) my agent submitted Theater of Seduction to looked like a miraculously speedy done deal. The manuscript hit an editor's desk who absolutely loved it. Couldn't wait to sign it. Then it got to the final editorial committee and one guy shot it down.

Still have nightmares after that horrorfest. Went from looking like a world record--land agent, submit to major publishing giant, editor falls in love and contracts it--to a harbinger of heartbreak.

Everyone who's read the series loves it. They love the voice, love the setting, love the twists, love everything but contracting the book for publication, in fact. So when that happens--and considering that NY publishing isn't looking for anything new and different despite what they may claim on their blogs--that leaves only a few fates for my much-beloved Harlequin. I can trunk him and forget I ever wrote the series, I can look for a small publisher, or I can self-publish.

Until a couple of months ago, I would have slam dunked the Harlequin into my trunk and then cried miserably for months. But seeing how lightning struck unexpectedly with Zozo (evidently, it takes a demon for me where it takes a village for normal people), the self-publication option is unexpectedly attractive.

May only cry for weeks instead of months.

But here's the thing that I think a lot of publishers miss--there is definitely a market for non-trope, intelligent, multiple-genre romance out there, and that market is NOT getting the kinds of books they prefer. I am not a huge reader of romance, but I love it when I find those smart epic romances like the Outlander series by Diana Gabaldon. And I don't go in for percentages, either, like some publishers do in their submission guidelines--"the plot needs to be 50% romance" and so forth.

Kind of...sterile and unromantic when you put it that way.

At the end of the day, publishing is a business and that business was thrown ass over head with the advent of digital publishing, followed by the ease and (relative) affordability of self-publishing so that now it's hedging its bets--established authors OR self-publishing success stories with a built-in platform who crave the phrase "bestselling author" behind their name. And there's nothing wrong with that.

Except, perhaps, for the readers who are craving something new.

I've been blessed throughout my career as an author and editor to meet so many people--fans, reviewers, editors, other authors and particularly those in the romance genres--who have sincerely loved my work and gave me the opportunity to share in theirs. At the end of the day, I'm going to rely upon their judgment on my work because their judgment is what really matters. Harlequinade is too risky for Big Five publishing and that's cool.

But it's not too different for readers actively searching for something different. And different happens to be my specialty.

This is a massive series--ten completed books including a historical fiction prequel--with one of the riskiest characters arcs I've ever attempted. Yes, that's saying a lot considering what I'm known for doing to my characters. But I wanted to experiment with the romance genre, and set its tropes against speculative fiction tropes just to see what I could make of it. And what ensued was, in my opinion, pretty damn awesome. These books are books I would read over and over--not because I wrote them, but because someone finally did.

So here in a few months, you guys will get to meet my favorite characters I've written so far. I have a feeling the Harlequin might just intrigue some of you.

Yes, the Harlequin is one of the main characters. He's the bad guy, in fact.

My motto remains unchanged. Nothing is as it seems.

Strap in, kids. It's about to get busy with the Harlequinade.

Catherine Brighton had given up on theater when crippling panic attacks drove her from New York and her dreams, but when enigmatic director Phillip Lewis invites her to join his theatrical company, she knows it’s her ticket to Broadway. The company’s magical performance style is the holy grail of theater, an acting style that uses empathy to heighten the theatrical experience and psychically seduces the audience. Catherine quickly discovers that the company isn’t what it seems. Phillip has a strange hold over the cast, and the lines between reality and the play blur into a dangerous emotional minefield…one that’s cost previous leading ladies their lives.

The danger is compounded when Catherine falls in love with one of the male leads, Dominic LeClair, who is torn between his love for Cat and the secrets pressing in around them. When Catherine’s best friend, Mike, offends Phillip at a party and dies in a mysterious accident hours later, Catherine begins to question the uses of the company’s unique magic—and Phillip’s motives.

Despite her fear, Catherine is drawn deeper into the mystery surrounding the company and the man she loves.  As the eighteenth century tragedy unfolds on the stage, Catherine discovers that the plot extends well beyond the script, and empathy can be used for much more than wowing an audience. If she can’t find a way to free them all from Phillip, she’ll remain trapped in his theater of seduction forever.
on November 18, 2017 No comments: