Patience is most definitely my weak point. I don't have any.

Okay, maybe that was a mild exaggeration. I don't have much.

I've always expected everything to happen right NOW. When I was an actor, I expected (wanted? dreamed? prayed?) to be cast from the first moment I opened my mouth. After all, how hard was it? Obviously I was perfect for the part or else I wouldn't have auditioned right?

Writing, however, has taught me patience. Although I'm fast and prolific, you can't write a book in a day. Heck--you can't even write a good short story in a day. By the time you get the darn thing written and revised and edited and betaed and revised again and polished and queried and submitted, well...then you have to wait. An audition was a one-time thing, hit or miss, over and done with (unless you really struck a chord) within a few minutes. A book? Well, it's an investment. A huge investment if you want to be particular about it. I have books I've been working on for what now? Six years? (Darkshifters) I'm fortunate in that I have so many books at varying stages of completion, but still.

So let's take stock. Aside from Darkshifters, both books, I've got Deception and then Harlequin, both set in the same world; I've got Terella, with my atheist goddess and her revolt against her own temple; I've got three more Asphodel books--well, four actually if you count the one that moves on to another series entirely; I've got my horror project based on the Bell Witch legend; and then I've got my Requiem project--you know the one (it used to be about vampires and the attempted theft of Mozart's Requiem Mass by the Count who commissioned it)--well, heck: that's three books right there. So yeah: thirteen books at various stages of the process. That's one hell of a commitment. So riddle me this: why am I so darn impatient?

No clue. All I know for certain is that rushing a story is a bad idea. So for now, I'll forge ahead and try not to hit refresh on my inbox every ten minutes.

Patience is a virtue. It's also well-nigh bloody impossible.

It's Out! Apostle of Asphodel Published by Aspen Mountain Press!


Well, it's finally done. The final book of my epic fantasy series The Asphodel Cycle has just been released. Apostle of Asphodel, the follow-up novel to Temptation of Asphodel is now available from Aspen Mountain Press.

Here's hoping that all of you Asphodel fans enjoy the conclusion of the story. After the other Asphodel novels did so well and won so much recognition, especially Temptation as a Preditor and Editor Top Ten Novel of the Year for 2008 and runner up to Christine Feehan's Murder Game in the 2008 Golden Rose award voting, I'm praying that Apostle keeps the standards up.

I'll just go ahead and cheat and let you know that out of the four books in the series, Apostle is my favorite.

So now I have to ask myself--what's next? Is there another story down the road for Tamsen and Brial? There are other options in the Asphodel world for stories--the next generation, perhaps, or maybe a couple of secondary characters. I've played around a bit with some of them. Who can say? But for now, Tamsen and Brial are quiet. They've earned their rest after all; they've been running around for years now. Maybe that peace they're always talking about will come to them at last. Maybe they can actually have some fun for a bit.

Or maybe they're taking it easy on the Elysian Fields, where all of the other great, dead heroes of mythology end up. They could be hanging out with Achilles and Odysseus for all we know...

Guess you'll just have to buy the book to find out.

Thank you to everyone who's shared the journey of The Asphodel Cycle with me. And a huge thank you to my editor, Sandra Hicks, who is also the publisher at Aspen Mountain Press. If I breathed life into these characters, she made them toe the line. A huge shout out to Renee George, who creates such lovely covers for these books and who I devoutly hope does every cover for every single one of my books in the future.

But most of all, thank YOU for reading--and loving--the world of Asphodel. So for now, from the soaring streets of Leselle and the blossoming orchards of Asphodel and the busy markets of Geochon, we bid you all a fond adieu. 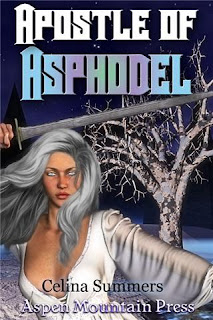 Well, The Asphodel Cycle is almost completed. *sniff* Tamsen and Brial's story is coming to an end. *sniff* So here's a little bit of a teaser to get you guys ready! You can read an excerpt at both my website and at the Aspen Mountain Press website. But for those of you who follow ye olde blog, here's a special snippet just for you.

***
Brial had tumbled out of the way when the severed head fell to the floor. He ran to join Wilden, who was chopping away at the snake’s midsection. The two mages showered fire down upon the beast, keeping up a steady barrage of magical attack.

Rage boiled up within me once more. I could taste it, fiery and caustic against my tongue, as I watched my loved ones battle against this cursed beast of the underworld. It was only a matter of time before someone was hurt or killed in this fight.
Lamashtu sets her traps well. She knows only too well what the death of any of these would mean to me, or what my own death would mean to the world of the Elves.

Rage consumed me, twisting in my soul like a living thing, until my hands shook with fury.
At that moment, the snake’s huge clawed hand swiped along the floor, upending all four warriors with a massive blow. The remaining heads shrieked triumphantly as the hands reached for the closest prostrate form.

Brial.
My vision dimmed as if someone had dropped a veil over my face. The magic soared gloriously from the pores of my skin to shimmer like an aura of silver in the blackness of the cavern. The magic had never felt like this before.

Always before, it felt different from me, a separate and distinct area where I could sometimes go. Now, it felt like part of me, a living part of me like my skin or my hands but with a mind of its own. I felt its connection to my mind and my soul, feeding from my fury as it flew from every particle of my body. A light hum sounded, building as it drew strength, and the snake turned its heads to me, distracted.
Within seconds, the magic had control of me. Everything was obscured through some strange mist. I did not care.

This was a new Tamsen, neither the half-human Countess nor the half-Elven Queen. I was a scion of the magic, a daughter of the power granted and tended by the Virgin Huntress, who confronted one of the dreaded denizens of the earth with a fury tempered by cold decision. I raised my hands and with a thought lifted everyone back to the other side and safety. Deprived of its prey, the monster bellowed in rage, the four heads thrown back as they howled at the ceiling.
“Tamsen! No!” Brial shouted. He struggled with Anner and Wilden, clawing to get back to the higher plateau of the temple cavern.

My gaze returned to the infuriated monster stomping toward me, its heads snarling and dripping acidic saliva, the huge claws twitching as if preparing to rip me in two. I let it approach while the magic simmered within me, telling me without words that it was almost time.
The creature stood over me. As the mighty hands dove down to hook me, the magic swelled.

The low hum escalated into a deafening roar as the power within me rushed out in a flood. The monster stopped, its heads reared back in surprise.
The magic I bore swarmed from my hand, flying at the monster with a whoosh.

The bolt of energy impaled the great snake at the base of its necks, shearing a hole through scales, flesh, and bone. Blood and venom exploded from the gaping wound, raining down upon the already slick floor with a sick splattering sound.
The monster screamed once; the terrible sound echoed from the vaulted cavern with a reverberating cadence that sent more loose rocks tumbling into the pit far below. It fell backward, one clawed hand tearing desperately at the massive statue. With a grinding sound of ripping rock, the great figure of Lamashtu sheared away from the obsidian walls, following the snake to the floor where it exploded with flying shards of stone. The creature writhed once or twice more, before succumbing to the mortal wound the magic dealt it.

I stood over the body of my fallen enemy, the magic subsiding into the well of power within me. Slowly, the veil faded from my eyes until my vision was once again clear and unobstructed. The corrosive venom was beginning its work on the statue, and I watched as the form and features of the seven-named witch goddess melted into a puddle of indistinguishable sludge on the floor.
I turned then to regard the stunned faces that peered at me from the opposite plateau. In the last seconds before the magic ebbed from me completely, I heard myself say, “So thus shall all the abominations fall when the power of the apostolate is unleashed.”
on July 01, 2009 No comments: