Yesterday, I Witnessed Something Extraordinary--Finebaum Family, Phyllis from Mulga, Tiny Tide, and Love

You may have noticed yesterday that I republished a post I did several months ago regarding a wonderful story about Bama fan and Finebaum caller Phyllis Perkins.

That's the first time I've ever republished a blog post, and that happened for a reason.

As you know, Phyllis's husband Don was diagnosed with inoperable and terminal stage 4 lung cancer some months ago, and this family, being of modest means, has been struggling financially. After I wrote that blog post, a trio of Finebaum callers (Rich Johnson, Johnny Lynn, and Fred Somers) started a GoFundMe campaign on Phyllis's behalf. What you may not know is that both Phyllis and Don were concerned about the cost of paying for his funeral.

Funeral costs are staggering these days--averaging between $8-10,000 in most places. The Perkins family, with both Phyllis and Don on Social Security, and already struggling under astronomical medical and daily living costs, would have been incapable of meeting those costs as they are already sinking further into debt. Medical debt is no joke, as I am well aware personally. Even if you're insured and/or on disability, there are some expenses that are just not covered. Even disability and Medicare only cover 80%, and the price of even the most conservative cancer treatment is just ridiculous. Add to that utility bills, food, house insurance, car insurance, etc. and you're looking at a family living at subsistence level.

So Rich and Fred and Johnny started the GoFundMe campaign to give both Phyllis and Don some peace of mind. While Phyllis wouldn't ask for anything for herself, for Don--she would. A goal was set to raise enough money to cover the expenses of a funeral, and to take that worry at least off the shoulders of a dying man. The campaign began on November 20. Fred asked if they could link to my blog post--which was obviously a no-brainer--and we began to try to stir up interest on social media. Using fan sites--in particular Crimson Tide sites where Phyllis is somewhat of a legend--slowly we began to see money start to trickle in. By 8 pm on January 13, the campaign had made $4500.

But then, something amazing happened.

First off, Paul Finebaum told the story on his show Wednesday afternoon. You've heard me mention Finebaum before--a longtime Alabama journalist who now has an extremely popular (and unpopular) call-in show on the SEC Network. His relationship with Phyllis goes back years, to when his show was a local gig on AM radio and she used to call him up and bless him out for criticizing her beloved Coach Gene Stallings. About the same time, an article came out in the Birmingham paper. You can read it on their website:
http://www.al.com/news/birmingham/index.ssf/2016/01/hey_paul_phyllis_from_mulga_ge.html

The article also referred to this blog. So obviously, being a writer with books close to release and a savvy blogger, I reissued the original blog post with updated links. And then Johnny, Fred, and I--Rich is out of town on a business trip--began to pelt social media throughout the afternoon with links, pleas, and updates. The Finebaum show social media was joined by the SEC Network as well as other media sites/personalities in generating a lot of Twitter traffic. Fred called in to the Finebaum show. Other callers and followers began to call/tweet with questions. Longtime Phyllis foe Danny Kanell donated a thousand dollars to the campaign And then--Phyllis called the show herself.

By the time she called, her campaign had already increased to around $20,000--almost five times the amount it had raised the night before.  Her call was just amazing--amazing enough that I can't describe it. You guys just have to hear it.

And after she called, a miracle happened.

First, a wonderful couple donated $10,000 to the campaign. But hundreds of other people gave what they could, from SEC Network's beloved Marcus Spears' huge donation to a little kid that emptied his piggy bank and gave it all--eight dollars. The child actually added to that later when he found roll of pennies, bringing the total gift to $13. People from all walks of life gave what they could. Alabama fans were joined by fans from the SEC schools--all of them. Some folks donated on behalf of their schools not even in the SEC--like Red Raider Ed (Texas Tech) who donated a thousand dollars. And every gift, regardless of size, was a pledge of love for this tiny Alabama woman who had somehow touched their lives--not only because of the tragedy she was fighting through, but because of her unswerving, unquestioning love for college football and her Alabama Crimson Tide.

In the past few hours, I've watched the total ticker edge up over $45,000. Radio and sports personalities all over the country are calling for their listeners/followers/readers to help--like most recently Cole Cubelic, for example, just off the top of my head. Some fans, like Fred from Plano made videos in support, encouraging people to make videos and donate.

This outpouring of kindness and generosity has not only restored my faith in humanity, but is going to make such an amazing difference to this family that has already dealt with so much. With Don so ill, he's constantly cold. The effort to keep him warm is resulting in utility bills over $450--a staggering blow to a couple on Social Security. This money doesn't mean new cars and clothes; it means survival, at its most basic level. But it also means peace. Peace for Don, who no longer has to worry how Phyllis will survive once he's gone, and peace for Phyllis, who can now concentrate her attention upon the man she loves who is slowly, incrementally leaving her behind.

But at the center of the story, for me, stands Phyllis, who is no longer quite as alone as she thought.

Last night I spoke with her on the phone, and amidst all the tears and laughter and overwhelming gratitude, she told me a story that encapsulates who she is down to the last detail. 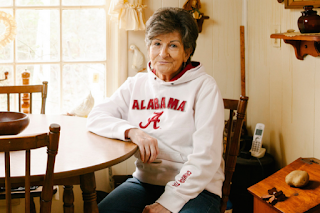 Twenty years ago, she was in someone's home who raised exotic birds for sale. She went to the bathroom, and while in there heard a little whistle. She looked in the window and found a cage with a tiny, weak cockatiel in it. The cockatiel was deformed, rejected by its mother, and unsaleable. The owner had put the bird in a cage without food and water so it would die.

Phyllis took that bird home. She bought vitamins and the top food. Patiently, she taught that bird how to eat--the mother had attacked the baby and destroyed part of its beak, so Phyllis had to coax food into its tummy seed by seed. One claw was deformed, and all the feathers on the undersides of the wings were gone. But Phyllis didn't give up. She lavished care on her little patient. She held it to her chest so it could hear her heartbeat and be soothed. And once the little guy grew strong enough to grip, she taught it to sit on her head while she went about her day.

One day, she noticed that when the Andy Griffith show came on, the little bird--now named Tiny Tide--would whistle along with the theme song. So she decided to teach him how to whistle Yea Alabama! (Full disclosure: as a Volunteer, I'm not too fond of the song personally, but as a Tide fan she wouldn't have taught Tiny Tide how to whistle Rocky Top, now would she?)

Every night, Tiny Tide sat on her head and she would whistle bars of Yea Alabama! to him. And before long, he did it! He could whistle the tune. One night soon after, Coach Gene Stallings called to see how her son was doing. (Hear about that amazing relationship in my original post about Phyllis) Tiny Tide was sitting on her head, and during the conversation he started to whistle Yea Alabama! Coach Stallings stopped cold.

Phyllis told him the story.

"Do you mean to tell me that's a cockatiel whistling Yea Alabama?"

"Can you videotape that? I'd like to see it."

So a few days later, they recorded Tiny Tide's Bama repertoire and sent the videotape to Coach Stallings. When he got the tape, he took it into the viewing room. All the coaches, players, athletic department staff, and even the president of the University were brought it to hear the story of the tiny, deformed cockatiel whose own mother had rejected it, whose owner had shut it away to die, whose life was saved by a redoubtable woman who would not give up on it. And the payoff?

"After everything that bird's been through, after everyone gave up on him, he can now sit on that woman's head and whistle Yea Alabama! And if that bird can do that, WHAT CAN YOU DO?"

Talk about a lesson in overcoming adversity. That seems to be the lesson Phyllis has for everyone--and it's a lesson few people are truly qualified to teach.

So you see, there's a reason why people have responded to Phyllis the way they have. There's something about a woman who, despite all the turmoil and challenges of her life, can inspire people like that. No matter what the odds are, she just won't give up...whether it's on a football team or a dying bird. Tiny Tide is now 23 or 24--still singing, still whistling Yea Alabama! and still clinging to his beloved owner's head like she taught him when he was an unwanted, unloved little bird marked for death. He now comforts her as she faces one of the darkest hours of her life.

If you can help, please head over to Phyllis's GoFundMe page and give what you can. If you are one of the over 600 people who already have helped, bless you for your generosity. If you can't donate, then please spread the word to people you know. But more than anything, keep her and Don in your prayers and thoughts.

Tiny Tide will thank you for it, and will sing.