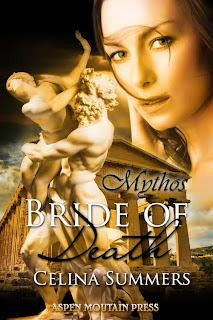 The first book of my new Greco-Roman mythology series, Mythos 1: Bride of Death has just been released!  The series is fantasy, but with a healthy dose of sensual content--after all, the Greco-Roman gods were a randy lot. Although I remain faithful to--and cite--the original classical sources, these books are most definitely for adults.
Bride of Death is available now at http://www.aspenmountainpress.com/new-releases/bride-of-death/prod_304.html and will soon be available from major online retailers as well.
Synopsis:


When the mischievous god of love targets Hades, the god of death falls hopelessly in love with the spring maiden Persephone, the one immortal most ill-suited for his dark domain. Her mother Demeter will never allow the Lord of the Underworld to court her beloved daughter. The king of the gods proposes an unconventional solution: Hades may kidnap Persephone and take her to the Underworld to woo her. If Persephone agrees to marry hades, Zeus will support the match.

But neither god has reckoned on Demeter's inconsolable grief at the loss of her daughter. If Persephone is not returned to her, the goddess has vowed to destroy all life. Can Hades win Persephone's heart before her mother discovers who has taken her? Or will Persephone make her own wishes known as the intended bride of death? Even in the world of immortals, time is not on Hades' side.

Go check it out today!  And get ready--there's a lot more Mythos coming out this year!