Classics, Epics, and the Theater of Vengeance

Normal people don't do that to themselves, but I think we've already established that I am anything but normal. Nearly 1.5 million words and 4800 pages. When you get right down to it, that's a hell of a commitment--not only for a writer, but for the reader as well. When Theater of Vengeance is released on Friday, July 20, I will hit the exact middle of the Harlequinade's story.

Obviously, Theater of Vengeance is the book where everything changes. 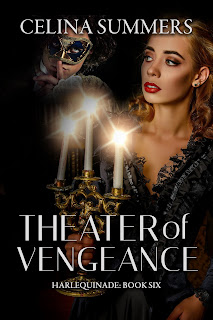 I grew up on the classics, as in the real classics. While most of my teenaged peers were out getting into trouble or trying to stay out of it, I was at home reading and studying the classics. Homer's two ancient epics about the Trojan War, Iliad and Odyssey. Virgil's fan-fiction, The Aeneid. Ovid's Metamorphoses. Greek and Latin authors writing the mythology of their cultures that have survived for over two millennia.

When I approach a story like Asphodel or Harlequinade, I'm creating new mythologies. Just like Virgil and Homer, I write those mythologies over the space of multiple books. Homer's epics had twenty-four books. Virgil's magnum opus had twelve.

I didn't consciously set out to write twelve long novels about my Harlequin character, though. I wish I had in a way, so I could cross my legs and say complacently over a single malt, neat, that "I wanted to pay homage to Virgil by creating twelve separate books in my epic." But nope--that's not how it went down.

The Harlequin is just one of those characters that won't shut the hell up. Despite the incontrovertible fact that the Harlequin is a medieval pantomime character who never once in the course of legit commedia dell'arte spoke a single word, still he won't quit talking. He won't shut up until the last word of book twelve, and even then there's a good chance he'll find more to say if (and that's a big if) he survives.

Someone asked me the other day how I would best describe myself as a writer. Oddly enough, I was originally stumped. As usual, the first thought that came to mind was something smartass. Can't escape the dominant parts of my personality so easily after all. And sure, there are lots of standard remarks I could make. A spec fic writer...a sci fi/fantasy/horror writer. The writer of books featuring strong female protagonists. An obsessed idiot who spends all her waking hours staring at a laptop screen while she tries to find ways to get just one more bloody death squeezed into a plot. But then, it occurred to me that in the end a writer cannot be defined. There's not one single description that any writer could arrive at for themselves. In the end, I'm no different. But I guess if I had to narrow it down to one summation, it'd be the following:

I am a writer of modern epics featuring modern mythologies that reflect the changing culture and society I observe around me.

If there's one thing I learned from reading the classical epics though, it's that you can't maintain the status quo throughout the course of four or ten or twelve books. Your plot, like your characters, have to reach turning points during which their comfort and security have to be stripped away. A good story can't continue on the same smooth, unbroken track. A heroine's story has to pivot in places so that she can confront unexpected challenges and instant, serious consequences for her actions.

With Cat's story in the Harlequinade, it would have been only too easy to keep her progressing down the same road. By the time she reached the end of her journey, though, she would have devolved into a trope...a predictable badass urban fantasy character. For a lot of folks, both writers and readers, that's perfectly all right. Reading is a form of entertainment, after all. We read fantasies so we can escape from the mendacity of the real world into worlds that exist solely to give our imaginations scope to breathe.

But I'm not fond of tropes. I want my characters' journeys to trod upon unbroken paths and through unexpected obstacles. In the Asphodel series, I made my heroine deal with physical disabilities before she reached the end of her road. Kind of hard to win a sword fight if you can't walk, right? With Cat, a different kind of strength is required. She's an empath, a mage who can sense and influence the emotions of others. The challenges she faces come on a wholly different level, and to provide her those challenges I...well, no need to sugar coat it.

I screw her whole world up. Brutally.

You see, even though the world Cat lives in is a fantasy, it's still life. We aren't challenged by what we expect. Challenges come from the unexpected, when in a single moment we confront the destruction of everything we hold dear or a choice where there isn't a good or right decision to make and you're only choosing between two bad options. That's how life works, whether it's on the battlefield at Troy or the underworld of Asphodel or in the dark world of magic and immortals in the Harlequinade or sitting here in my study, wondering why in the hell I'm up and blogging at seven in the morning after pulling an all-nighter. If you're reading any of my books, then I owe it to you to make sure that I don't spoon-feed you exactly what you expect to happen next. I can't take the easy way out because I know that to make a fantasy credible it has to feel like real life.

And real life never takes the easy way out. Never. That's not an author being arbitrarily cruel to her characters either.

You guys enjoy Theater of Vengeance. If you want to check out an excerpt, one's up on my website. Otherwise, see you on Friday~!
on July 17, 2018 1 comment: