Pat Head Summitt: A Post I Won't Be Able To Write in Past Tense

When I was a kid, I met a young woman whose influence on my life could never have been guessed by any of the farmers or Saturday lawn experts gathered around the counter of my dad's store. She was tall, but she seemed more than tall to me. I was not quite eleven, and she was the head women's basketball coach at the University of Tennessee. My family knew hers very well: the Head family lived not too far from my grandparents, and like me she was a Clarksville girl born and bred.

But even in the late seventies, everyone knew Pat.

Girl's basketball was bigger in north-central Tennessee, because Pat Head Summitt had single-handedly built it. Single-mindedly too, because that may have been her most singular personality trait. What she focused on, she focused on absolutely.

Pat was an All-American player at UT-Martin. Back then (the dark ages) there were no scholarships for women athletes, so her family paid her way through school. She went to UT as a graduate assistant--women's basketball wasn't even sanctioned by the NCAA yet--and became the head coach of the Lady Vols in 1974. Paid $250 a MONTH, she washed the uniforms, drove the van to away games, and completed her Masters. In 1976, she won a silver medal as the co-captain of the Olympic team, and began an unparalleled coaching journey by leading back-to-back 20-win seasons and earning the Lady Vols their first #1 ranking.

But this is public history. Any Vols fan, any women's basketball fan knows this. The girl looking up at the tall lady with the infectious laugh and flashing eyes was only vaguely aware of what Pat had done. She was only aware of how magnetic she was, with all those old gentlemen farmers clustered around her as she talked with her brother and my dad.

Every Lady Vol who played all four years under Pat Summitt graduated with a degree. 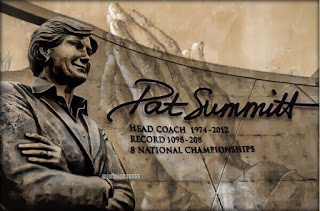 Every Lady Vol who played under Pat Summitt played in at least one Elite Eight.

Every Lady Vol who played under Pat Summit went to the NCAA Tournament EVERY. SINGLE. YEAR.

Pat Summitt was such a great coach that she was offered the UT men's head coaching position. Twice.

But that was all in the future when I met Pat Head Summitt for the first time. Even then, though, she was a big deal--a hometown legend in the making for my hometown, which had already given the world the amazing Wilma Rudoph, Olympic icon and the first woman to win 3 gold medals in one Olympics.

And yet, there was something so awe-inspiring about her even then--a woman who'd been to the Olympics, who'd just taken her first team to the IAIAW Final Four, who suddenly saw me looking at her from the end of the counter and who promptly said, "Is this your daughter, John?"

My dad said, "Yeah, that's my girl Celina. She's not a ball player because they won't let girls play football."

The men around the counter laughed, but Pat looked at me with a smile. "They will someday," she assured me. "And you'll be great at it."

And I believed her.

How many 11-year-old girls did Pat Summitt say that to? "You'll be great at it." Probably thousands. And for each one of them, that moment still feels as personal and pertinent to them now as it does to me today.  Especially today.

I'm writing this post today because I can't write a memorial post for Pat Head Summitt. I can't wait until she's gone because I can't believe she ever will be. I just can't process it--and the rest of Vol Nation won't be able to either.

I met Pat Summitt many times in subsequent years--in my dad's store off and on, in Knoxville, at games, random moments in the halls at school or the mall or in hospital corridors or at funerals. She always asked about me--about my grades and interests and talents--and she remembered them too. It was always, "Hey, Celina--congratulations on doing so well at that debate competition! Heard you beat the tar out of our boys--good for you!" or "I hear you're turning into a fantastic writer--you keep working at it!" or "I saw your wedding pictures; you looked beautiful."  With everything she had going, she had the ability to index information on an amazing scale--what to most legendary coaches would be minutiae: the everyday accomplishments of a girl who grew into a woman and who'd never won a game of HORSE.

The last time I saw Pat Summitt, I didn't expect her to know who I was. I stood by in silence, while the people I was with gathered around for conversation and autographs and all the things we Vols do when we meet one of our most beloved legends. Pat Summit could turn a group of 60-year-old businessmen into fangurls. She wasn't coaching anymore, and I hadn't seen her in years although my dad had. I knew she was suffering from early-onset Alzheimer's and what that meant. She acted the same as she always had, and I just watched from the outskirts--content just to be there. And when finally the group broke up to let her go on her way, she walked right by me.

We were at the same eye level, which seemed strange to me because I'd always remembered her as taller than me, a literal interpretation of looking up to this woman. She gave me a little hit on the arm and said, "Football. You'd be good at it, but writing--writing you're great at."

Then she walked away.

And I believed her.

Pat Summitt changed the world for women's athletics. She built not just UT but women's collegiate sports, and served as the foundation for both through four decades. She bridged the gap between the era when there were no NCAA-sanctioned women's basketball teams to the birth and growth of the WNBA, which is liberally stocked with her players. She is easily the greatest woman coach in any sport of all time, and one of an elite group of coaches whose achievements will never be superseded. On the Mount Rushmore of coaching greats, Pat Summitt's face will be there. But to generations of Tennessee girls, whether they played for her, or knew her, or even just heard about what she built for young women everywhere, Pat Summitt means so much more. And her loss will be correspondingly greater.

2016 has already taken so many greats. Too many. And this loss is personal for everyone whose lives Pat Summitt touched. But if you put this into perspective, the pain grows sharper. In a world where coaches are being busted trying to hide the fact that their players have raped women just to keep them playing, this coach and her impact grows commensurately greater. Because in the end, it won't be the scum like Art Briles who are remembered as the Greatest Of All Time coaches.

But Pat Summitt IS the Greatest Of All Time. Not just in coaching. But in life as well. And so to me she is, and must be, always referred to not only with unparalleled respect, but in the present tense. So I wouldn't be able to write this when she's gone. Only now, while we still have her, and when, hopefully she will know on some level what she means to millions of people--a true icon, with integrity and passion and the undiluted ability to not only do what's right but to inspire others to do so as well.

Today is a great day to make a donation to the We Back Pat Foundation for Alzheimer's research, not in Coach Summitt's memory but in celebration of who she is and what she's done.