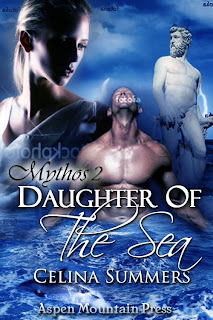 Holy hell!  Yes I do!  I have cover art for Mythos 2: Daughter of the Sea!
I totally love this cover.
Audrey and I worked for about eight hours straight today--not counting baby play breaks, of course--and the TO DO list is shrinking steadily.  We walked to the fabric store and picked up more supplies, and then spent a fun afternoon watching the baby in her bouncer and working on my display.
A great day. Productive too.
on April 23, 2010 1 comment:

Email ThisBlogThis!Share to TwitterShare to FacebookShare to Pinterest
Labels: A Month In The Life, Audrey, Aurora, book cover art, Daughter of the Sea, Mythos, RT convention

My day started at seven--a little late for me, but I'd been up until five am the night before.  To start off with, I spent a lot of time this morning involved with e-mails and editing. Despite my resolve not to edit until after the convention, I neglected to realize that I needed to edit the excerpts for the Aurora promotional CDs.  So that took a couple of hours, then I had to lay the documents for the CD out again. Once that was done, though, I went to work on the house. Audrey would be here at about five.

Funny, isn't it? I called Audrey for help because my back was fucked up and then proceeded to fuck it up more getting the house clean for her stay here with the baby--who promptly messed the house right back up.  I started in the guest bedroom.

I've been getting ready for Cynthia Vespia to come stay with me during the convention. So, I went ahead and decked out the guest room with new linens and things and hadn't planned on putting them out until right before she got here.  Well, naturally, that didn't work out quite as I planned.  So I put on the new bed linens (gorgeous) and dusted and scrubbed and cleaned.  When, at last, the guest bedroom was *perfect* I went into the living room, fully intending to get some promotional work done.

That lasted five minutes.  Two hours later, the living room was immaculate and I went into the kitchen to make a pot of coffee.

An hour and a half later, including a lovely half-hour span on my hands and knees scrubbing the floor, I had to go to the restroom.

Well, I'd bought a new shower curtain too.  I couldn't very well hang it unless I cleaned the rest of the bathroom, right?

It was now four-thirty.  I took a broom to the hallway and was just sweeping the last of the debris into the dustpan when the door opened and here came Audrey and the baby!

Guess what I did the rest of the day?

Yep. Exactly. Save for the one-time pristine condition of my now-wrecked house, I accomplished absolutely nothing.  I'd call it a wasted day, but hell--now my baby is here with her baby.  Overall, then, it was a great day.
on April 23, 2010 No comments:

Today was also the day I came to a momentous decision. I will not write or edit anything else until after the Romantic Times convention.

Why, you may ask?

There's no way I can get all this done. I have to be able to walk (or at least sit up) for the convention next week. I also have to have all my materials done and looking professional before I go, otherwise this has all been a waste of time and energy.  Now, I'm not one to perpetuate exercises in futility, but it still makes me feel kind of inadequate that I can't get all this done on my own.

It was hard, admitting that I don't have a big *S* on my spandex superhero suit. I am unaccustomed to confessing my humanity.  But, after an hour of staring helplessly at the pile of material and glitter and feathers and sequins and jewels and masks and copies of my book covers on photo paper waiting to be cut and blank CDs and jewel cases and four packing boxes of water bottles and one of magnets and one of document stands--all the time hoping desperately that my pain pill would kick in so I could get up off the couch, common sense won out over ego.

I called my daughter--on her birthday--and asked her to come up and bail me out.  She's an artist.

She gets here tomorrow, so I spent the rest of the day putting together text documents for the promotional CDs and cleaning the house. We're going to give Audrey a surprise birthday party when she gets here with cake and candles and presents because she didn't have much a a birthday at her house.  Then, when she does get here, we can work on these things together.

There's another fringe benefit, of course. Audrey will be bringing her baby who turns six months old tomorrow.  So on breaks, I'll get to play with Aurora!  Yay!