In the 1920s, the most famous man in the world was arguably Harry Houdini, stage magician and escape artist. While normally this sort of entertainer would have concentrated on making his audiences believe that he possessed some supernatural power, Houdini was different. Not only did he claim the direct opposite, he went a step further. He claimed that no one had arcane abilities of magic or spirit communication, and he put his money where his mouth was.  After his mother died, Houdini tried to contact her through various psychic mediums, but none of them were legitimate. He began to give lectures on fake mediums. In 1924, he wrote and published a book: A Magician Among The Spirits. All year on his 1925 tour, he offered a $10,000 reward to anyone who proved to him that their purported abilities were real. 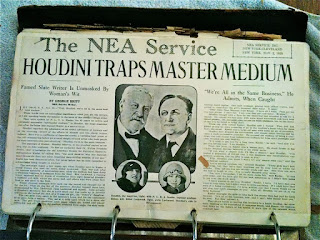 No one ever claimed that money.

At the time, the spiritualist movement was huge internationally. Less than a decade after World War I, too many families in Europe, Asia, and the Americas were still dealing with the deaths of their fathers, husbands, and sons. Europe was still in the throes of severe political upheaval, just a few years after the deposition of Tsar Nicholas and his subsequent execution along with his wife and children and only a few years before fascism took hold of a turbulent post-war Germany. If there were people with the ability to contact the dead, their talents and skill had never been more needed.

And as with so many issues of faith, that terrible fact attracted the worst kinds of snake oil salesmen and exploitative opportunists. Houdini maintained a one-man war against them and was remarkably successful in his pursuit of frauds. After all, who was better situated to know all the tricks of the trade than a man who'd gotten rich from using those tricks to entertain sold-out theaters every night for months?

Houdini was a magician, yes. But he was also an honest man, who couldn't bear the dishonesty that was coming between people struggling to survive during the Great Depression and their money--money that should have been used to feed and clothe their children instead of rewarding the lies a fake medium concocted. And Harry is perhaps the forefather of the awareness that around any paranormal community, there's a fringe element. I call the inhabitants of that element paranormal parasites, and they're far more common than you think.

Yeah. I know what you're thinking. "But...but Celina! Are you saying that ALL paranormal stuff is some kind of scam?"

No. What I'm saying is that paranormal parasites can be found at any level of involvement, and skepticism is necessary not only to understand what's happening around you but to protect yourself from something far  more terrifying than cryptids and poltergeists.

Doesn't matter what you believe in, there's nothing scarier than man.

Each identified area will get its own blog post, along with signs of what to look for so that you won't end up becoming the victim of a parasite. 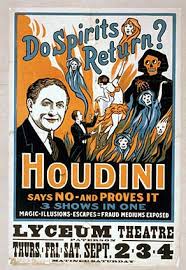 The only way to verify legitimate paranormal activity is to eliminate any other potential explanations. Any long-time investigator (or Sherlock Holmes fan, for that matter) will inherently understand and agree with this. It's a fact. The only way you can conclusively determine if something is paranormal or supernatural is to eliminate every other possibility. In the paranormal world right now there are too many people desperate to prove that what they believe is a universal fact when in actuality, that's the direct opposite approach to what investigators should be doing.

What we should be doing is trying to prove that what we witness, capture, or believe has a logical, non-paranormal provenance. Anything else is just a subjective experience--an allegation or a claim. And I'm not immune to that rule. All over the paranormal section of this blog are stories of events that I've experienced, documented, or researched. But those stories aren't evidence. You can't consider them proof of anything. BUT my subjective experiences. These observations do serve a purpose from an investigatory standpoint. They can be road maps, perhaps, to help investigators find evidence.

For example, I tell the story of my experiences with the Bell Witch Cave and my earliest paranormal research in the post What A Real Night Investigating in Adams Is Like. A significant portion of that post deals with how the rocks in the Bell Witch Cave should *never* be taken home as souvenirs. Heck, I didn't even TAKE a rock; they just showed up in my car. When I took one I missed back to the cave the next day, this is what happened:

The next morning on my way to class, I noticed that we'd forgotten one of the rocks we'd found piled up in the seats. I skipped my afternoon art history class to drive that rock back to Adams and give it back to Mr. Bims. When I got there, he was sitting outside on his lawnmower, and as I got out with the rock he smiled at me.

Bims Edens was one of those slow-speaking, polite Southern gentlemen. He was so very kind, but he also had a devilish gleam in his eyes sometimes when he smiled. As I told him what had happened, his eyes got that little twinkle in them and he smiled slowly. "I knew something happened," he said. "You've never left before without telling us goodbye and thank you."

"The rocks were what freaked me out," I confessed. "That's why I thought I'd better make sure to bring this straight back.""Last night the dead men's lanterns were glowing in the woods," he said, looking in the direction of the Bells' old graveyard. "Things was restless last night. Probably one of those stupid kids on the hayride got things riled up. But she gave you a warning, Celina. Better be careful, girl--she let you know that she knows who you are."

Mr. Bims took the rock, said goodbye, and headed toward the trail. I knew he was going to put the rock back in the cave--like he always put those rocks that came back in the mail from all over. I should have taken it myself and spared the old man the trip, but I knew he wouldn't let me. He believed Kate had given me a warning, and so he'd given me one too.

That's a pretty scary story but one that's ultimately just a subjective experience. There's no proof that the rocks from the Bell Witch Cave are cursed, right? The post was written in October, 2015 about events that happened in October, 1990. But two days ago, on October 6, 2019, the Fourman brothers released a new investigation on their paranormal channel called Paranormal Nightmares: The Haunting of Jackie Bell. And a significant element of that story has to do with the severe haunting of a family after they visited the Bell Witch Cave and brought back rocks as souvenirs.

Here again--this isn't evidence the proves those rocks are cursed. There isn't any scientific method that will verify the existence of a curse. But these two stories corroborate each other. Two events that occurred decades apart to people with no known connection or association but that have similar results. And what makes all this even more interesting is that the Fourman brothers take an EVP meter to one of the rocks from the Bell Witch Cave at the clients' house, and document extremely high EVP readings.

And that is proof--not of the paranormal, necessarily, but of something unusual and different about that rock that marks it as unusual. Paired with both my story and Katharine Bell's story, the meter readings do seem to indicate that there's some kind of evidential trail that stretches from the Bell Witch Cave to subsequent paranormal activity. So there may be some way to learn more about the Bell Witch haunting as a result, and that's why I hope to investigate the cave again soon. Now that there's a concrete link, I can hopefully build off my subjective experience and look for additional evidence that can lead to proof of paranormal activity on the old Bell family land.

There's a trail to follow. Sure, it'd be really easy for me (if I was a paranormal parasite) to sit here and say, "See? That's PROOF." But it's not enough to establish the legitimacy of the paranormal on its own. What is DOES do is give me a direction as an investigator, and that I can pursue.

Oh and by the way, if you've never watched any of the Fourman Brothers' investigations, you've been missing out on what is one of the best paranormal research groups out there. Go check out this video, and I'm almost positive you'll be hooked. Seem to be great guys, strong investigators, and outstanding storytellers.  Check out their YouTube channel or the first season of their new Paranormal Nightmares show on Amazon Prime.

So settle down, buckle in, and get ready. We're about to take a cold, hard look at the world of paranormal parasites. Hopefully, this will help any of you who are dealing with any sort of paranormal issues to make your own determinations about things impacting you and your life.

First up, probably the most controversial of the paranormal parasite topics: the clergy.
on October 08, 2019 No comments: