The Phoenix Is Fallen

When I was a grownup, I watched with escalating horror as the legends of my youth passed away. As a writer, I keep odd hours. But last night, I wasn't writing. Last night, I was conducting a vigil. I had a horrible feeling all day. For some reason, I felt like it was the last day--a day I thought would never come. Some people you honestly believe are immortal. As a grownup, I worked on my novel, editing, with ESPN News on the TV, and every few minutes I checked the ticker. When I'd first watched Muhammad Ali, I didn't wait until 12:30 in the morning as I did last night.

When I was a kid, bedtime was non-negotiable.

Unless I was watching a sporting event with my dad. And every time that Muhammad Ali was fighting, I got to stay up. My dad loved Ali--had loved him since he'd won Olympic gold along with our hometown girl, Wilma Rudolph. My dad isn't the kind of guy to jump on a bandwagon.  He's the kind of man to march against the tide around him. He'd loved Cassius Clay; he continued to love Muhammad Ali. And because my dad was my hero, I did too. My love of sports began on those nights when I was allowed to cuddle with my father in his big chair, watching football games or those amazing, spectacular boxing matches when Ali came back to retake his heavyweight title.

A phoenix, rising from the ashes of his career, to regain what was unfairly taken from him.

When I was a kid, I didn't care about politics.

My dad did. And although he is an Army veteran, he respected Ali's stand against Vietnam. I remember hearing him argue with my grandfather and uncles about it. He was outraged that Ali was stripped of his titles, losing the best years of a boxer's career. "Shouldn't matter what a man thinks, sports has no reason to punish a guy for his beliefs."

When I was a kid, I didn't care about race.

That was my dad's generation--and Ali's. I was of the generation who grew up after the Civil Rights Act, after the abolishment of segregation. My parents raised their kids to ignore the still-difficult relationship between the races in the Deep South. But I couldn't help but  be aware of how Ali already transcended that invisible-but-still-felt barrier that was slowly disintegrating around us, and how beloved he was. And as a little white girl in an all-white family I wasn't aware of how incredible that was.

When I was a kid, I watched Ali's greatest fights.

I watched his comeback fight and loss to Joe Frazier as a kid on my dad's lap. I watched his victory in the second fight over Ken Norton. I watched Ali beat Frazier in their second bout, and the most brutal boxing match I've ever watched--their third and final match. We went to Nashville to watch the Rumble in the Jungle on PPV.  Rope-a-dope  had more impact live than it does now. I still don't know how he withstood the beating he took from Foreman, but he did. Make no mistake, all you dudes who thought Tyson could have beaten Ali if they'd met in their prime--no way would Tyson have been able to go the distance with Ali, and he would have had to. Ali refused to stay down on the mat.

When I was a kid, I watched the end of Ali's career.

I watched every single fight after he beat George Foreman. Every. Single. One. When he lost to Larry Holmes in a fight that no doctor should EVER have given the okay to, my brother and I sat in our living room and cried. Ali was our hero--the invincible man of our youth. It was unthinkable that he could lose. But he had. The Frazier fight was one thing--Smokin' Joe was a monster. The sorrow in Howard Cosell's voice, the obvious sound of him choking back his own tears is something I remember vividly to this day.

When I was a grownup, I realized how important Ali really was.

Once I was old enough to understand the political importance of Muhammad Ali, I finally was able to process just how vital his influence was. His oft-quoted "I ain't got no quarrel with them Viet-Cong--no Viet-Cong ever called me nigger."

That quote doesn't deserve to be softened with a politically correct n-word. You need to read it in its original form to get the impact, the full impact, of an Olympic gold medalist who couldn't eat in the same restaurants with my family, or use the same bathroom, or drink from the same fountain. So don't expect me to insult the memory of Ali's courage by paraphrasing what he said.

When I was a grownup, I realized again how important Ali was--to me. 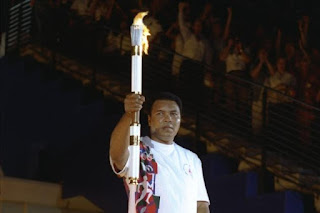 The opening night of the 1996 Olympics was an landmark day for me. After years of estrangement, I was visiting my dad. We were watching the opening ceremonies together. And how fitting it was that Ali was the surprise they'd been touting all day. When Janet Evans climbed the steps at Olympic plaza and all of a sudden the light fell on that oh-so-familiar face, I teared up. I'm tearing up writing this now. This man who'd meant so much to people of color everywhere, who'd inspired so many people, stood there as the representative of his country once more at the Olympic games. Once the torch in his hand was lit, the shaking in his hands was so obvious and terrible.

My dad said, "Someone's going to have to help him light that thing."

I said, "No one is going to help Muhammad Ali do anything--not when the world is watching."

Ali gritted his teeth, put both hands on the torch, and stilled the shaking out of sheer will. When I saw the fire catch, I started to cry. Not because Ali was obviously so ill, but because he was still refusing to give up. He was down on the mat in the eyes of everyone watching, and out of his inability to give up, his defiant nature, his self-pride, and above all the consciousness that billions of people were watching him around the world, he overcame once again the elements ranged against him.

He refused to stay down.

When I was a grownup, I could watch all of Ali's fights--the ones before I was born. The Liston fights, when Ali's incredible speed confounded the champ--and the speed of his mouth terrified him.

When I was a grownup, I could discover his bravado from the earliest days and laugh with him. I could learn his history, from the stolen bicycle that led him into boxing to the Olympic games where he'd met--and briefly dated--Miss Wilma, who was a beloved icon of sports in my hometown.

When I was a grownup, I could appreciate the courage it took for Ali to make the stand he did against the draft, and how unapologetic he was for taking it.

When I was a grownup, I could witness Ali's transformation from draft-dodger into a man that represented the highest ideals of sports--a man who'd sacrificed his career to stand up for his beliefs--and  how everyone grew to respect him for it.

When I was a grownup, I watched all the idols of my youth begin to die. 2016 has been particularly hard for people my age. But today, today is the hardest day. Muhammad Ali was the first of my childhood heroes, and my worship of him began at the age of five--a little girl sitting on her father's lap watching him box on TV. Ali is an unbreakable link between my father and me. Dad put up with a lot of crap because he loved Ali so much--and the fact that his precocious daughter had a nasty habit of scowling at a grown-up that was giving Dad grief about it and saying, "Ali is the greatest."

After all, Ali had said it himself--and no one dared to deny it after the Frazier and Foreman fights. I have this mental image of him ascending to whatever afterlife is there, surrounded by a huge crowd of Congolese kids yelling, "Ali bomaye! Ali bomaye!"

And whoever's at the gate doesn't even have to ask his name.

Like my dad, Ali has always been there--boxer, political figure, orator, icon, philanthropist--a constant, smart-mouthed phoenix rising from the flames.

Today, the flame that began in the world consciousness at the Rome games of 1960, the vibrant, defiant flames of the phoenix are finally doused. What once people thought was empty boasting is now universally accepted as the truth.