Of Kittens and Keyboards 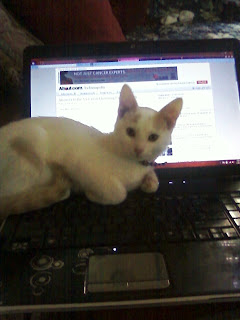 Since we lost Impy a few weeks ago, the kitten, Thor, has pretty much taken over the house.  Kittens have a habit of doing so, mostly because they're so curious that they constantly get into trouble.  Unfortunately for Thor, his favorite pastimes get him into trouble.

When he's really spunky, he's swinging from my curtains or the furniture or the top of the bookshelf, wailing piteously for rescue.  That's funny and cute--except on the curtains, which now have a plethora of teensy little claw marks, or the furniture now that I've finally trained the big cats to avoid. (they associate claws in the furniture with a water gun. Heh.)  Thor, unfortunately, loves water.  He jumps into the bathtub without checking first, which has resulted in several episodes of dripping kitten.  He plays in the water bowl.  He turns on the kitchen faucet.  Therefore, he is impervious to the water gun and thinks I'm playing with him when I hose him down.

Poor Thor.  Since he loves water, he gets punished with timeout.  He gets put into the bathroom with a stern, "NO!" and left there, to meow and yell and wail for a few minutes until I take pity on him and let him out.  Then he jumps up on me and purrs and chin rubs and cuddles before he takes off to get in more mischief, which usually involves torturing Elf, that cat who most claims me as 'his human.'

But that's not the worst of it.

Thor has several favorite napping places, but his unquestioned favorite is the keyboard of my laptop.  He's still small and lightweight so when he lies down he doesn't depress the keys, but it's damn hard to write with a kitten sprawled out over qwertygfdsacx and z. If I move him, he complains.  If I try to type around him, he yawns and takes up uiohjkb and n as well.  Sometimes we compromise, and he gets right up beside the back of the computer or underneath it when I'm writing on the couch or the bed.

He's starting to lose that kitten fuzz now, and is more properly an adolescent cat at almost five months.  But he still acts like a kitten, and I have the horrible fear that he's always going to prefer napping on my laptop keyboard.  In another year or so, he'll weigh fifteen pounds and the only letter I might be able to hit is the / or the ' or ] -- which would totally suck.

But then again, I know now what to do with this laptop when I retire it in favor of a new one. Some cats may like their soft little animal beds, but Thor will always sleep on my old, dead laptop.
on June 11, 2011 2 comments: