A few days ago, the writing community and romance fans lost one of the true greats. Sharon De Vita passed away after a brief illness. Her loss cuts deeply, at least for me. And while writing a remembrance blog post isn't really my thing, I feel compelled to share with you my love and respect for Sharon and my absolute sorrow at her death.

I first met Sharon through Musa. We hadn't even opened our doors yet, and she submitted her novel The Estrogen Posse to me. My first thought was, "No way. Someone's playing a joke on me. There's no way that Sharon De Vita is submitting to us!" I mean, this was THE Sharon De Vita--NYT Bestselling author of over 30 books, winner of the RT Lifetime Achievement Award, beloved of Harlequin and Silhouette readers--why would this writer be sending ME her new novel? 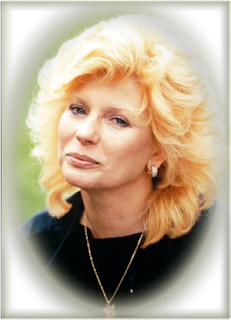 But it wasn't a joke. Sharon, returning from a hiatus after the tragic death of her son, was taking her career down a new path. The Estrogen Posse was a departure from the light-hearted romances she was so well-known for. The manuscript clocked in at a hefty 150,000+ words, with elements of suspense and humor framing a recently divorced woman's quest for herself amidst murder, family turmoil, and a new romance. The first scene was a one-sided conversation between the protagonist, Ellie, and God.

And Ellie won the argument.

There was no way I was going to let that novel be published by anyone else. I'd made such a connection with the story--and its author--that I'd determined we would publish the book within the first hundred pages. We contracted the book within a few days. I edited the novel myself, and The Estrogen Posse was one of the three books we published on Musa's opening day.

Can't think of another e-publisher who started off with such a writer/book combination, or one with a Janet Evanovich blurb on the cover. But what had started as a business relationship between Sharon and myself, morphed into an editor/author connection that was one of the most rewarding professional experiences I've ever had. By the time Musa opened for business, Sharon had become our one-woman encouragement team and biggest fan. She brought us other authors, who'd been screwed over by their traditional publishers releasing electronic versions of their books and paying them a few cents per sale. She bragged about our way of doing business, our transparency, and our support system.

Sharon was so important to us at Musa. Every time we saw her emails in our inboxes, we automatically felt good.

What a rare gift that is! Think about it: online communication is somewhat sterile, especially in a business situation. Think of what kind of person you have to be to supersede that cold formality. Sharon was such a writer, such a wonderful person, that even in an email zipped out in two minutes flat she could evoke such warmth and sincerity and such caring that it could make four people she'd never met feel happy with just a few well-chosen words. That's why Sharon's books were so well-loved: she had such a gift with evocative language that her readers cared about her characters with the same kind of intensity that they cared about their best friends. The Kirkus reviewer for The Estrogen Posse saw the same thing:

While working with these dark topics, the author skillfully weaves in a dose of levity without any heavy-handedness. As a result, readers jump between gasps of shock during the murder investigation and stints of uncontrolled laughter as Ellie’s ridiculous “posse” mobilizes into action. An emotional, fun-filled romp.

You see, Sharon cared about those characters and shared them with us in her books, just like she cared about us as individuals--and she shared those feelings so candidly and with such sincerity that it was impossible to doubt that she meant anything other than exactly what she said. Don't get me wrong: Sharon and I went toe-to-toe several times during the editing process. She could be just flat out ornery if she chose to. And then, once the  orneriness had passed, it was like the sun breaking through the clouds and banishing the storms from the horizon.

Sharon gave Musa another wonderful gift: her daughter, Jeanne, came to work with us at Musa and became such an integral part of the company that it was hard to imagine how we'd ever gotten along without her. Jeanne is another one like her mother--she has the same spunk, the same warmth, the same earnest interest in what's going on around her. When health issues started to come between Musa and me, Jeanne stepped in and I trusted her to do so.

But now we find ourselves here, heartsick and sad, when the days have dimmed unaccountably and even the sounds of an Ohio spring seem to be muted. Our world of writers and readers has lost a beautiful person, one whose talent made so many people happy and whose personality and loving nature was evident in every message or interaction. But beyond that community of authors, Sharon's loss resonates on a deeper, more personal level. We have lost a member of our family, a selfless lodestone to set our course by. We have lost an advocate, who fought zealously for other writers throughout her career. We have lost an innovator, who was willing to take a chance and make the best of it.

And I have lost a dear, dear friend. Sharon encouraged me as both an editor and a writer. She cared about what was happening in my life, and she made my life brighter once our paths intersected. Her passing was sudden and wholly unexpected, coming as it did without warning.

Sharon leaves behind her husband, Frank, her two daughters, Jeanne and Annie, and two lovely little granddaughters. She also leaves behind legions of devoted fans, bereft authors, and shattered friends. But Sharon has also left us her books--all those wonderful books, the stories that remain as her legacy--that will always remain, immortalized, like she is now. My grief is for my own sake, because I've lost someone important and dear to me, and for her family, whose pain is just so intense right now. And yet, this particular death has brought to mind something that Leonardo da Vinci once said: "As a well-spent day brings happy sleep, so life well used brings happy death."

Life well used. An apt turn of phrase, and one that so embodies Sharon De Vita and the legacy of love and laughter she has bequeathed to us all. Her life was well used.

God speed you, my friend. You will be--and already are--sorely, painfully, sorrowfully missed.

(And when I get there, wherever there is, we'll continue that argument about commas that I will, as usual, win. Or perhaps I'll let you win it, and just rejoice in the moment that we'll share.)