Mythos 2: Daughter of the Sea is now available at Aspen Mountain Press. 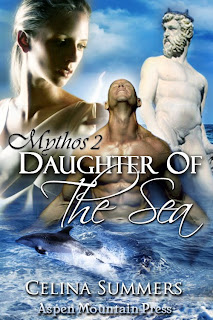 The young gods of Olympus have pursued the sea god Nereus’ daughters, Amphitrite and Thetis, since they grew to maturity. The sisters are used to the adoration of immortal men and like the attention they receive. But when the imprisoned Titan, Prometheus, makes a prophecy that Thetis’ son will be greater than his father, the gods shun the beautiful nymph. Thetis hides herself away from Olympus, leaving her sister Amphitrite angry and in no mood to deal with the fickle tastes of men.

When the King of the ocean, Poseidon, watches Amphitrite dance at a feast upon Olympus, he falls instantly in love with her. His attempts to court Amphitrite end in disaster; she flees to the one place in the three realms where no Olympian can go. Can Poseidon find some messenger to break through her anger and win her heart? Or will the great god of the oceans be spurned by this daughter of the sea?

I have to tell you, I absolutely LOVE this story.  I liked writing Amphitrite--who is underknown in the Greco-Roman mythologies--because I could get away from proscribed personalities or tendencies.  I could make her (and her sister, Thetis, in the next book) more my own.  Amphitrite is a no-nonsense kick ass kind of heroine who makes Poseidon jump through hoops.  HER hoops. Literally.

Can't argue with that.

At any rate, you can take a look at Daughter of the Sea on the Aspen Mountain Press website for now and major third party distributors within the week.

And don't forget to enjoy the best abs in mythology on the cover, too.  Hard to argue with a god that looks like one. Special kudos to Tuesday Dube for the fantastic cover and a big shout out to Lori Basiewicz, my long-suffering editor.