I was excited for lots of reasons. First off, the AMP ladies got in yesterday for the most part.  It was really great to meet my EIC, Sandra Hicks, for the first time--and Laura Baumbach, who is the EIC of MLR Press and a legend as far as I'm concerned.  But I also got to meet some of the writers I edit.  LB Gregg is adorable--little and sassy and spunky and shoes I would quite frankly kill for.  Helen Hardt is tall and elegant and drop dead gorgeous; Sam Cheever has the market cornered on cute and manages to do more things at one time than I do without looking like a spaz--like I do.  Lizzie T. Leaf took one look at me and instantly adopted me, I think.  Instantly, our relationship went from editor-writer to younger sister-older sister.  She told me what to do all week and I loved it.  Then, my husband went to pick Cynthia Vespia up at the airport this morning--she's staying with us in Lancaster.

The first thing I did this morning was head over to my spot on promotional lane.  Last night, I went to set it up and realized that we'd left the cover flats at home.  You know: the things with my names on them? Otherwise, all I had was a shelving unit with some Carnival masks hung on a board covered with fabric.  I ended up putting a few water bottles and document stands on the shelves, thinking I'd come back this morning and fill it all up.

Much to my surprise, it was totally empty this morning. Nary a bottle or document stand to be found. So, I decorated the space as I'd originally intended and stepped back to take a look.

No one else on Promo Lane had anything like I did.  Most of the other writers were giving away bookmarks in baskets.  So when this hit the convention: 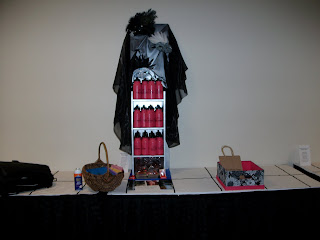 --it got a lot of attention.  It also stayed fairly empty throughout the week, even to the point where people would grab them out of my hands while I was trying to restock.  Great fun overall, though--by the end of the convention I'd had my promo items, bookmarks from Lizzie, magnets from Eden Elgabri, flyers from Cynthia Vespia all on my promotion spot and every single darn thing was GONE.  We amused ourselves by wondering how many authors would go vertical next year with raspberry colored water bottles and red document stands in LA next year, and then by coming up with increasingly more outrageous ideas for what I'll do.  I'm thinking lights and fountains.
After all--it is LA.
I hit a couple of workshops on Wednesday afternoon, but the most important things I had to do were agent/editor appointments.  I had two scheduled for Wednesday afternoon and I was nervous about pitching to them.  I wasn't one hundred percent sure of what I was doing, so I took the time after lunch to narrow down and perfect my verbal pitch, implementing the information I'd learned the day before from the writers' panel at the pre-con workshop about pitches.  So when time arrived to pitch I was ready.
And I was stood up. TWICE.  Two totally different people from entirely different companies pulled no-call, no-shows for their appointments.  I found out later that the no-call no-shows were completely beyond their control, but that didn't help matters at the time.  I was pissed, and in my opinion, rightfully pissed and that was the state of my mind all the way through until the opening night party.
The first party was Ellora Cave's tenth birthday party and, as you can imagine, it was a little bit on the wild side.  We hung out there for a little while and then returned to the bar, where we could drink and gaze upon the beauty that was the banner--the book covers LB and I had put on that banner that now every drunk at the convention was staring at.  Those drunks (and not so drunks) were in turn stared at by the morticians' convention that was sharing top billing with Romantic Times.  I thought it was about the funniest thing I'd ever heard of: romance writers and funeral directors?  How funny!
I continued to think so until the next night. More on that later.
At any rate, I'd decided that I was going to nail down every single free spot on the pitch session schedule the next morning.  The workshops were all fine and good, but I was at RT to pitch my manuscript and that had to take priority.  Back in the bar, we befriended a trio of male writers: Brett Battles, James Scott Bell and Robert Gregory Browne.
After a long evening of writer talk and quite a few beers, we all went our separate ways.
on May 03, 2010