Let's Get Ready for the Asphodel Cycle!

So I've jumped back into the world of Asphodel with both feet. Time to get this show on the road.

As my longtime readers--all five of you--may remember, from 2007-2009, my first fantasy series The Asphodel Cycle was published. The books did fairly well--top ten on multiple online retailers, great reviews, some fairly awesome awards and nominations, and lots of hate mail when I killed off an extremely important character that was, apparently, loved more than I realized.

And then, of course, the publisher went defunct a few years later while I went on to bigger and better things.

But the Asphodel world wouldn't shut up. I really like playing in the fantasy-mythology mash up sandbox. It combines all my favorite things. And while I went on and started delving into more literary fantasy, every once in a while I'd sneak into a secret file and write some Asphodel for fun. Then, last fall, the story suddenly took off on me--so that now I have an entire SECOND series set in the  Asphodel world, bringing the adventures of Tamsen and Brial to eight books total.

And then I was stuck.

The first rights to the original series were gone, so that automatically killed off the chances of selling the second series with the same characters. And for the first time, I considered self-publishing. After all, I ran a publishing company. And that's when it came to me.

I decided I would reissue the first series in four consecutive months--and the second series in the four subsequent months. That means I will be releasing each book in the series a month apart. (A publishing plan I'd dearly love for George RR Martin to subscribe to by the way, and NO-- John Snow will NOT remain dead. Duh.)

Here's what you need to know to prepare yourself! 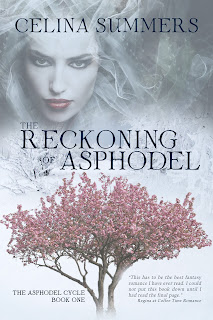 Blurb:
Tamsen de Asphodel watched as her parents were killed—murdered by her sorcerer uncle. Raised by her Elven kin, Tamsen knows her destiny is to avenge them both. Unfortunately, Tamsen’s destiny is complicated. She is the sole heir to her human father’s estate, but she is also the last remaining heir to the Elven throne. The Elves, especially the Scout Brial, are suspicious of her human ties and her magical power. Her magic is unique—neither human nor Elven, dangerous, and difficult to control. And when she and Brial fall in love, it is a relationship the Elves will not accept. But when her uncle moves to destroy the Elves, war explodes across both kingdoms. Only Tamsen, with Brial at her side, can bring human and Elf together to fight against him. In the reckoning that is coming, she will need both sides of her conflicted nature…and the aid of a goddess.

Tomorrow--excerpt from Reckoning. Later this week--cover art for Redemption of Asphodel. Also later this week--a basic series blurb for The Black Dream--another wild ride through classical mythology and traditional fantasy, where the stakes are greater, the cost is higher, and the death toll rising.

Also, I will be creating an online lexicon for the world that will cross over between here and my website--the mythology, the language (yes, it's Latin-ish), the history, the families--all that good stuff.

Did I mention my new website? The Cache Vault is now up and running--and will be getting bigger like pretty much anything I write. You might note some interesting news while there about my pseudonym.

So find me on social media--friend me (I take a lot of Twitter and Facebook breaks) and get ready. Oh and the last thing--