Attack of the Carnies--Part Three 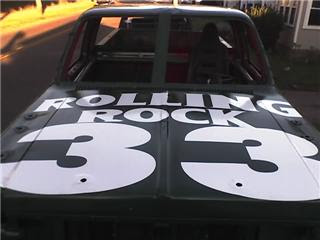 
That's really all I have to say.

Okay, so last night was torturous. The regulars were whooping it up because they had trucks in the truck demolition derby. The Fairview had a truck--a Rolling Rock truck! Gee, wonder why they picked Rolling Rock..

At any rate, they lost.

I don't think that Fair week was quite what my doctor had in mind when he said 'light duty.' By the time we closed last night, I could barely walk. Even now, I'm still lying in bed and have no intention of moving from it for any reason today--save perhaps for a long, hot mineral salted bath.

Apparently the carnies were tired too (or hungover from Monday) because they all left by a quarter of two. We actually managed to get all of our bar work done early. Although the night felt slower, it was characterized by a brutal hit at about 10:30. I mean brutal. I slammed my finger in the cooler door (it's now black--maybe that's not a good thing?) and banged my head on the edge of the bar while stocking beer. Yeah, yeah...go ahead and say it.

So, the story of the night. One of the head carnies (right below the carnie czar) got in trouble with his wife for not coming back to the camper instead of going out drinking. He was on his FIFTEENTH shot of Jager in an HOUR, and his reply was: "I spent sixty bucks for you to get your hair done and it still looks like shit. I have to drink! It's a better waste of my money!"

Yeah. I did a spit-take of fresh-squeezed lemonade that one of the carnies brought me. It spewed all over the bar and I mopped it up and tried to look innocent.

In the end, though, the regulars ran the carnies out. I think I have to give the point to them.