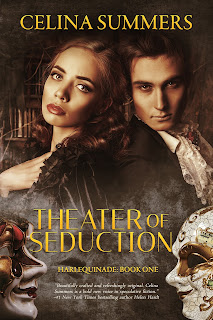 The great thing about writing the Harlequinade is that the story is told in so many theatrical ways. First you have to introduce the plot:

For me, writing about the theater was just a matter of time. I spent my misspent youth as an actor, director, and designer in professional theater and there's something about being involved in a production that's addictive. Then, too, theater stories have a good track record. *coughPhantomcough* It's easy for the lines between the reality of the play and the real world to get blurred. Theater is as close as we get to real magic in our mundane world, so for a fantasy writer this was fertile ground.

But once the reviews started coming in, I was able to breathe a sigh of relief. People were responding to the story the way every writer hopes they will. And when you start getting reviews like these:

"I never expected something this good. This is a unique storyline to me. So many surprises. I was almost part of the sudience. I definitely felt, but I also remembered. I will not give up the story. This is a book that has to be experienced. I loved the characters, they drew me in quickly and never let go. I felt it all..."

"Theater of Seduction grabs your attention from page one, draws you into its intricate web of delicious characters and spins a story full of everything you never knew you wanted in a book. I am hooked and can’t wait for what’s next. Based off of this piece of work, I will gladly read anything Celina Summers cares to write. She is just that good..."

...you know you did something right. Getting reviews like that are extremely gratifying. Means that I did my job correctly--I told a story that resonated with readers. They got it--which means they get me. The world of the Harlequinade has been set. (Grab Harlequinade 1:Theater of Seduction here)

So after setting up the plot, you have to introduce your protagonist. And today is the day you get to really meet Cat Brighton in book two of the Harlequinade--Theater of Deception. 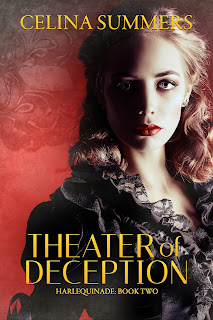 Cat Brighton may be my favorite character I've ever written. She's a badass with serious vulnerabilities (panic attacks are no fun). She's compassionate by nature and ruthless by design. (You kind of have to be in theater). She's sexy, sarcastic, smartass, sassy--a lot of alliterative s-words. But what makes her so much fun to write is that she's always thinking ahead, always trying to decipher the puzzle before she's even convinced there is a puzzle. So when she finds herself in situations that should be impossible, she keeps her equilibrium and finds a way to push through it.

After you've set up your protagonist, then you move on to other characters--the hero and the villain. Or, in Cat's case (because she never makes anything easy) multiple heroes and multiple villains and none of them stay in their lane. 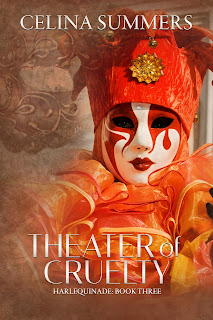 Thing of it is, I can't tell you too much about them or the whole story's ruined. Suffice it to say--things are not always what they seem.

This much I will say. This series is a urban fantasy/time travel/historical fantasy/paranormal romance that stretches over a ten-book story arc. Whatever a character may be in book one, he's almost certain not to be in book five. There are multiple male characters to follow--Dominic is Cat's leading man in Theater of Seduction, while Alistair is her...heck, I don't even know what Alistair is. Quicksilver, really--he's a very changeable kind of guy.

As for the Harlequin...

The one character who stays in his lane throughout is Phillip, the director of the Theater of Seduction. But even then, that lane takes a lot of unexpected turns.

At the heart of all, though, is a story that is unique. It's fun, it's dangerous, and it's hopefully thought-provoking.

I spent a lot of time thinking my way through this story. I mean ten books! That's more epic than my epic fantasy! But I set myself a challenge with this world. I wanted to see how far I could push a storyline, how vast a character arc I could create--if I could take the fantasy and magic of the theatrical world and add real fantasy and magic to it.

Let's find out if it worked.

There is no illusion greater than fear.
Six months after Catherine Brighton’s theatrical troupe finishes its Broadway run of the Carnival trilogy, the company mounts a new play: Harlequin. The character fits perfectly into the theater of seduction—a magical power that compels an audience’s emotional responses. However, rehearsals are tense. Her husband, Dominic, distrusts the actor playing the lead role. Cat and Alistair, Dominic’s brother, struggle to keep the peace.
Soon something inimical is dancing around the company, spinning strands of danger that entangle Cat in a shockingly familiar web. She fears that Phillip has somehow returned from the dead—not that Dominic believes her. Whoever her unknown enemy is, he’s masquerading as the title character from Harlequin—a character both sinister and seductive—which terrifies her. But when she unexpectedly finds herself trapped two centuries in the past, Cat learns that there are far worse things to fear. Like Time.