I only got an hour of sleep last night.

I was hurting too badly to get comfortable.  I couldn't sleep anywhere--the bed, the couch, the chair, the floor. Nothing worked.  I finally dozed off for an hour around four, but woke up a little bit after five and just decided to forget about it.  My ankles had both rolled the day before and both were swollen and painful to the touch.  The flats I'd worn for the last two days had literally bruised my feet, so I chucked and went with my boots.  Yeah, I know--heels are a bad idea, but I needed the support for my ankles.

After the regular stocking session on Promo Lane and the obligatory smirk beneath the banner in the bar, I limped slowly off to the area set aside for pitch sessions.  The lady in charge of the pitch sessions is a lovely, sweet gal named Patti Lewis.  A reviewer and writer and former bookstore owner, Patti and I would meet up either at the pitch sessions (where she jokingly called me her stalker) or in the smoking area with the other ten smokers at the convention.  Every day, she was dressed beautifully and always with a coordinating hat.  All week, she'd handled the pitch sessions with aplomb and a charming, professional manner.

When I got there on Friday morning, Patti was surrounded by a horde of eager writers. That wasn't new. What was rude was a girl who was haranguing Patti at the top of her voice and butting in as Patti tried to help other people.

In front of the editors and agents who were watching and waiting for their morning appointments.

I was horrified. Not only was this incredibly rude and bitchy, but it was so unprofessional that it literally made me cringe.  When Patti had finally had enough (and that was MUCH longer than I would have lasted), she told the girl to go sit down and she'd call her when it was her turn.

So instead, naturally, the girl stood three feet away, crying and blubbering to all her little friends about how mean Patti was--again, right in front of the agents and editors. Organizing those pitch sessions was a thankless job, and Patti Lewis did it with such grace and ease that I was more than impressed; I was awed. And for some little beyotch to stand there and bawl about how mistreated she was really made me want to knock her right off her Payless two-for-the-price-of-one-plus-a-dollar 1992 clogs.

I'm not certain how successful the whiny one was, but I certainly was.  I pitched to Tor, Grand Central publishing, Sourcebooks and Jim Mc Carthy of Dystel and Goderich and they all requested the manuscript.  Jim (who'd lost a battle with curry chicken at lunch) and I (who lost a battle with two pairs of hose in twenty minutes and made it to the pitch bare-legged and bitchy) had a great side conversation about Andrew Lloyd Weber, which made that pitch session even more pleasant than it would have been.  I was really quite surprised--these agents and editors were all kind, interested people, who genuinely wanted to like my book from the beginning and didn't scruple to say so.  I like to think I am now a pro pitcher, because on this day I went into those meeting without even the slightest bit of fuss.  It was fabulous.

Never be afraid to sit down and talk with an agent or editor. You'll miss out on an interesting conversation and some really fabulous people if you let your fear get in the way of the interpersonal interactions that can take place when two people are discussing something they both love--books. 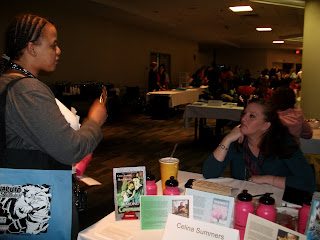 Friday was also the Book Expo, where small press and e-published authors got to sign books for their fans.  The final six water bottles (I'd hidden them) and the last fifteen document stands helped identify me to the readers, who stopped by to see me, got some cover flats, ordered some book downloads and generally had fun.  There I am, talking to a young lady whose minor is classical mythology.  We had a great conversation. All in all, the Expo was a lot of fun.

But then, after the Expo was over, everything hit me at once. Once I'd changed into comfortable clothes and replaced the boots with tennis shoes on my poor, abused feet, exhaustion and pain made me into a bona fide martyr.  As a result, my husband took me home and I missed out on Heather Graham's Vampire Ball--which was the one social event I really wanted to attend.  I iced down my ankles--now a lovely shade of green--and went to bed, actually falling asleep before midnight.

But I did derive a very important lesson from this day at RT--one I'm going to pass on to you.  An aspiring writer has no room for "bitch" in her repertory.  Treat everyone pleasantly (even the agent-who-shall-not-be-named who ditched me for my Friday morning appointment) and act like a professional.  You never know who is watching--and who will remember you as the wannabe diva who acted like a jackass because a real lady of class and dignity didn't have the time to instantly gratify you.