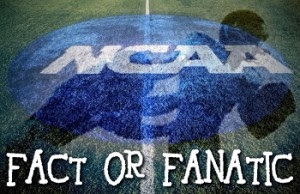 This is the series of articles I did called Athletes, Universities, and Crimes as part of my NCAA:Fact or Fanatic sports column for Blogcritics Magazine.

What began in December, 2016 as a general look at the problem nationwide gradually developed into a sequential indictment of Baylor University and its still-evolving scandal involving the football program. As events unfolded, it became increasingly apparent that the somewhat nebulous "rape culture" term that has appeared in numerous Title IX lawsuits is more than just a catch phrase. Rape culture is an accurate representation of what happened at Baylor from 2011-2015 as exemplified not just by the athletes accused of sexual assault, but their teammates, coaches, athletic department, campus police, local law enforcement, board of regents, university president, and a significant proportion of its fan base.

I worked in conjunction with two other people on this series that I need to credit. Laura Leigh Majer, who is  a Texas-based sports journalist--a special contributor to NFLFemale.com and the host of Down And Dirty Sports podcast gave me insight from her unique situation as a woman covering sports in Texas. And Kevin Lindstrom, a Dallas area attorney who also covers college sports for GigEmGazette.com. Their expertise enabled me to set up a unique foundation for an experimental format-- both male and female points of view, with unquestioned credibility in their areas of expertise (legal and media), both graduates of Texas universities (Texas A&M and SMU), and living in Texas today. They gave me perspectives on the case that illuminated the way the rape culture was developed at Baylor and how, also, it ultimately played out. Their input greatly enhanced the scope of these articles, and I think provide unexpected clarity and analysis.

This is an index of those articles so they can be found and accessed easily and in sequential order. Keep in mind that earlier articles were written before much of the latest evidence was released, and therefore the Art Briles texts referenced in Part Five hadn't surfaced before then. My intention is to continue the series as I learn more, and will continue to index and catalog those posts here.

Baylor Rape Scandal for Blogcritics--Part One