It's excerpt day! The Asphodel Cycle 3:The Temptation of Asphodel 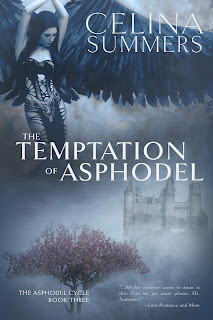 Book 3--The Temptation of Asphodel
The game of the gods is speeding up, and when Tamsen and Brial find a long-lost civilization of Elves, the pattern of the gods' game starts to become clearer. After a new magic evens up the odds of the foreordained battle, Tamsen begins to feel confident—until a lethal and forbidden possibility tempts her from her path.
But that possibility is actually the opening gambit of an ancient, dangerous deity--a gambit that signals the emergence of a new foe into the game.
When Tamsen is drawn into conflict with immortal enemies, she discovers that the line between obedience and temptation is much narrower than she thought.
Obedience is dangerous; temptation can kill.


“I don’t like him,” Brial announced less than a minute after we’d retired to our room.
“Why not? I thought he was very nice.”
Brial stared down at the burning logs with a creased brow and his arms crossed on his chest. “There is something about him that just isn’t right.”
I raised my eyebrows, poured two glasses of wine and handed one to him. “Well, we’re only following him to his people and then to the mountain pass,” I said, seating myself in the chair opposite where he stood. “It’s not like we’re moving into his house.”
“It’s just too convenient,” he muttered. “It doesn’t make sense that so many of our people would remain secret from us for all this time.”
“That is strange,” I admitted. “Of course, I’ve never met any Elves who liked to travel, except you, perhaps. When you think of it that way, it makes more sense. The feravir we encountered lends some credence to his story. Until tonight, I couldn’t figure out how an Elf came to be so far from Leselle. If large settlements of Elves live in these mountains, it explains a lot.”
“True, but still, why wouldn’t they have sent word? Any Elven scout who can roam these mountains could cross over to Leselle at the border.” He scowled. “And why would a feraviri be this close to as large an Elven city and not be taught the lore?”
“We’ll probably learn the answer to that when we meet them. Why worry about it? It’s helpful to find a guide through the mountains at this point. If this Nige proves to be as experienced as he claims, it can do nothing but lend us an advantage, don’t you think?”
Brial’s eyes met mine coolly. “You have already three Elven scouts in your party, Tamsen. One more shouldn’t make that much difference.”
“I’m not casting any aspersions on your abilities,” I retorted. “This Nige is more familiar with the area, that’s all.”
He set his wine glass down at the mantle and scooped me up in his arms, settling himself into the chair with me tucked onto his lap. “I’m just wary of accepting help from an unknown source. We know nothing of these Elves, and it triggers my suspicions that their existence is unknown in Leselle. You may be right; perhaps I am too mistrustful.”
I nuzzled the side of his throat. “I don’t think I’d love you as I do, Brial, if you weren’t the most distrustful Elf in the world.”
He laughed and took my empty goblet from me. I slanted a look up at him from under my lashes with a wicked little smile and felt triumphant when I saw the intensity starting to mount behind his glittering eyes.
“You’re trying to change the subject,” he accused, wrapping my long braid around his hand.
“It appears to be working.”
He tugged my head closer to his, his lips hovering over mine. “You are an evil woman, cariad.”
I brushed a swift, scorching kiss against his lips with a soft laugh. “After all, Brial, it has been a long time since we were in a room, with a bed—”
Brial cut off my words as he kissed me and with one easy movement, he rose from the chair and crossed the room to the bed. He laid me onto the soft mattress, his lips leaving mine only when the bed sank under my weight. I smiled and ran a loving hand along the strong line of his jaw. Then, he lowered his head to mine and I lost all awareness of anything but him.

The next morning, as we ate an early breakfast, I kept my eyes on my plate. The others were talking in low voices around me as I attempted to keep a gloating expression from my face. When I looked up, Brial caught my eyes and smiled. The heat rushed to my face and I dropped my eyes again. We were nearly done when Nige’s slender, cloaked form entered the common room.
“Are you ready, my Queen?”
I pulled on my gloves and got to my feet with a frown. “Nige, will you do me a favor?”
“Certainly, my Queen.”
“I have a name,” I pointed out. “Call me Tamsen; I get very tired of ‘my Queen’ or ‘your Majesty’ after a while. And please don’t bow to me every time you see me; it gets on my nerves.”
Nige looked at me in shock. “I could never treat you in such a discourteous manner.”
“Consider it a command, then,” I advised. “If we’re going to be traveling together, I don’t want you hung up on all this formality.”
“As you wish, my Queen.” He bowed and left the room.
“This one is going to get irritating,” Mylan noted to Anner, who nodded in agreement. Surprised, I looked at all of my companions and, to a man, they were all staring at me in disgust.
“What did I do?” I demanded.
“It’s not you, Tamsen,” Mariol replied. “It’s that sycophantic Elf.”
“Don’t you think you’re being a little harsh on Nige?”
No one answered and I stalked from the common room with an irritated slap of my hand against my thigh.