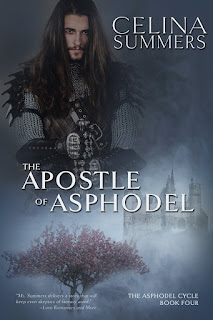 I jumped in front of Mariol, using my blade to keep the ferocious bird-women away while the mage muttered behind me. Before long, several of the Harpies deduced that I had the shortest reach of any of the attackers and converged on Mariol and I, their talons clicking together as they hefted the long spears to their shoulders.
“Any ideas?” I threw back over my shoulder, swiping at a grasping claw.
The Harpy screamed and fell back, blood dripping from her scaly leg. Another soon took her place. Mariol didn’t answer me, mumbling under his breath instead.
“An idea would be really good right about now!” I said more urgently, blocking a thrusting spear with my sword and reversing the blade, snapping the shaft in two so that the obsidian point fell to the floor at my feet.

Mariol grabbed my arm and pushed me aside. Surprised by the unexpected shove, I crashed to the floor with an indignant yell. Before I could clamber to my feet, a ripple of energy detonated over my head. With ragged screams and terrified shrieks, the Harpies tumbled across the chamber to fly against the obsidian walls, falling down heavily to the floor.
“What did you do?” I asked in amazement.
Instead of answering me, Mariol hauled me to my feet and shoved me toward the nearest Harpy, who was struggling to rise while her wings fluttered around her shoulders. “Go...kill...Harpies!”
The effects of Mariol’s spell, whatever it was, were temporary. As the Harpies flapped around trying to regain their footing, Brial, Wilden, and I attacked them while they were on the ground and presumably weaker. I discovered that their speed of attack was undiminished, although their agility was hampered upon the ground. The first Harpy I confronted hissed at me and I barely avoided the slashing swing of one taloned foot as she lunged for me. Their handicaps lay in the fact that their wings were befouled and tangled, the feathers bent the wrong way and some missing.
But even on her back a Harpy is a formidable foe.
I was able to get close enough to the Harpy to penetrate the frenzied swipes of her claws. Watching the talons carefully and jumping over her flailing wings, I leapt upon her torso and sank my sword to the hilt in her breast. Instead of screaming like a human foe, the Harpy’s eyes dulled and she fell limply off my blade. A second later, I was knocked off my feet as a second Harpy screeched in anguish and launched herself at me.

She hit me hard in the back and I flew several feet through the air with her on me. We landed in the clearing, barely missing the stone bench. As soon as I felt the ground behind my back, I pushed up hard with my legs and the heavy body of the Harpy rolled from my feet and fell some feet away. Without stopping to think, I coiled back up to my feet and went after her.
Somehow, she’d managed to grab one of the spears, and I narrowly avoided being skewered as she thrust it at my mid-section. Sidestepping the spear, I swung the blade and it connected with the soft tissue on the inside of her upper arm. Screaming, she dropped the spear, rolling to her side and pushing herself up with her good hand. More agilely than I would have thought possible, she rose to her clawed feet, one arm dangling at her side, with her wings twisted behind her.
Another detonation sounded behind me, but I had no time to look. The Harpy leapt at me, snarling, one talon extended before her for my throat. I dove to one side, rolled up to my feet and planted my sword in her back between the crippled wings. As with the first, she slid silently to the floor, where she lay face down in the ashes.
I turned back to Mariol. He was under attack by two of the vicious creatures, who clawed ineffectually at the shield he’d erected around himself. I darted back toward him, stooping to pick up a fallen spear. Using it like a javelin, I hurled it at one of the Harpies. The spear struck her side and she screeched in pain, twisting this way and that as she tried to remove it from her flesh. Her companion swung to face me, and for a moment our eyes met.
There was nothing resembling humanity in her stare. She had the same intense glare of any other bird of prey, and it fell unblinkingly on me as I approached her, my sword held before me. I circled around the flailing body of the Harpy I’d felled, who thrashed upon the floor with the spear vibrating as she screamed.
Her attack, when it came, was swift and silent. The only warning I had was the abrupt narrowing of those emotionless golden eyes, then she launched herself into the air. Amazingly, her wings righted themselves and with a single hard flap she hovered above me. Those eyes never left me as the wings furled and she hurtled straight toward me.
A couple of feet away from my unprotected face, however, her headlong dive stopped as if she’d run into a wall. The impact jarred her head back with an audible snap, and the Harpy tumbled to the floor, where she lay dead and sightless at my feet. I turned to look at Mariol. He was pale and sweating, his hand extended toward me still resonating with the power of the shield that he’d shot between us.
Wilden dispatched the still-screeching Harpy I’d speared with an arrow to the throat. When she, too, fell silent, the room echoed with the sudden cessation of noise. I whirled around to look for Brial, and saw him wiping the blade of his sword clean on the feathers of another fallen Harpy. As he straightened, I sagged in relief. He was safe.
To my complete disgust, he grinned at me. “That was fun.”
Wilden snorted, whether in distaste or humor I couldn’t tell, but Mariol’s reaction was spectacular. “
Fun?” he repeated incredulously. “Fun! What would you have called it if we’d had to fight a dragon? Or maybe a tribe of cannibals?”
Brial shrugged. “Entertaining?”
Despite myself, and the carnage around us, I began to laugh weakly. Wilden joined in, his deep chuckle resonating against the obsidian walls with a comforting rumble. We fell against each other, laughing helplessly as we wiped tears from our streaming eyes. Mariol was hyperventilating, his nostrils flaring as he drew in deep breaths in an attempt to calm himself.
Then, the greenish-red flames of the huge, smokeless fire sputtered and went out, and our merriment disappeared with it.
on July 28, 2016 No comments: