Well, it's nomination season and the gods have been good to me again--so good that I'm still reeling.

You remember last year when The Reckoning of Asphodel was a Top Ten finalist in the Preditors and Editors Annual Readers' Poll as Best Sci Fi/Fantasy Novel of 2007? Sit back and get ready to be shocked.

The Asphodel Cycle 2: The Gift of Redemption has been nominated by P&E for Best Science Fiction/Fantasy Novel of 2008.

The Asphodel Cycle 3:The Temptation of Asphodel has been nominated by P&E for Best Novel of 2008.
I have also been nominated in the Author's Pages category!
If you wanted to vote (and of course you do, why wouldn't you?) go to http://www.critters.org/predpoll/. You can find The Gift of Redemption under Science Fiction and Fantasy Novels and Temptation of Asphodel under All Other Novels.
Then...hold on...it gets better. I have something to show you--twice: 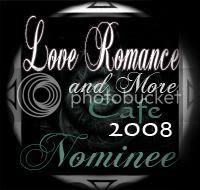 The Gift of Redemption was nominated by Love Romances and More Cafe as Best Sci Fi/Fantasy novel of 2008 AND Temptation of Asphodel was nominated for Best Cover Art of 2008--that wonderful bit of work done by Renee' George! Voting opens at LRM on January 5th, and I'll post more about that later.
I'm a little excited right now and off to post this all over the web. You guys hold down the fort while I'm gone. Gee...I'm totally gobsmacked.
on January 02, 2009 2 comments: