More Nominations for Apostle of Asphodel!


Well, awards season travels on apace and The Asphodel Cycle 4: Apostle of Asphodel has managed to pick up more nominations from Love Romances and More E-Cafe!  In today's announcement from LRC, Apostle was nominated for Best Cover of 2009 (cover art by the lovely Renee George) --

--and in a move that completed knocked me right off my couch, Apostle of Asphodel was also nominated for Best Novel of 2009!

To say I'm stunned is completely and irrelevantly inadequate. Over the years, I've had a great relationship both with Love Romances and More's outstanding review site as well as the incredibly fun and friendly denizens of the Love Romances and More E-Cafe.  I've done a lot of book release parties there, made a lot of great friends, gotten a lot of really fantastic reviews and generally have had a hell of a lot of fun.  So anytime, LR&M gives me a nod like this, it's a very special moment for me.  LR&M was the first review site to really believe in my work.  This nomination is the fourth nod LR&M has given to the Asphodel Cycle; every single one of those novels has been nominated for an award either by the E-Cafe or in the LR&M Golden Rose awards.
Thank you, LR&M.  Thank you from the bottom of my overwhelmed heart. 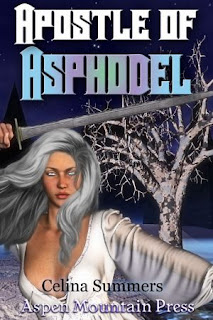 http://www.aspenmountainpress.com/more-hot-reads/apostle-of-asphodel/prod_263.html
Tamsen Ka’antira has grown into a woman of incredible power as the Virgin Huntress’ player in the game of the gods. After discovering the Hippolytes, a fabled race of women devoted to the arts of combat, she must lead them back to the plains of Ilia to fight the greatest war of antiquity again. The pantheon of gods awaits her in their Hall of Judgment, where the ultimate fate of the Elven Realm will be determined. Not only must she defeat her uncle, Gabril de Spesialle, but she must contend with a renegade goddess whose sole purpose is to overthrow the pantheon and rule over a universe wrapped in chaos. But when Tamsen finds herself standing alone against overwhelming odds, she is forced to make sacrifices that threaten everything she loves. Can she find the strength to complete the game and redeem the Elven people? As the Apostle of Asphodel, Tamsen must transcend from a wielder of magic into part of the magic itself.

Review from Love Romances and More (five out of five stars): "...Ms. Summers creates complex characters that continue to grow as you read this series. All the characters, new and old, will keep your attention as you try to figure out along with Tamsen, what her objective is and if she can overcome the obstacles placed in her path. I highly enjoyed this entire series but am sincerely hoping Ms. Summers continues on with Asphodel and her great cast of characters..."
on February 09, 2010 No comments: