Look at what I've got! Two brand new shinies to share with you.

The Asphodel Cycle 3:Temptation of Asphodel Top Ten Finalist for Best Novel of 2008 in the Preditors and Editors Annual Readers' Poll. 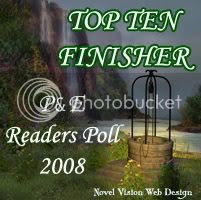 The Asphodel Cycle 2: The Gift of Redemption--Top Ten Finalist for Best Science Fiction/Fantasy Novel of 2008 from the Preditors and Editors Annual Readers' Poll: 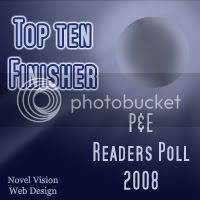 Can I just say...wow?!?!?!?!
Thank you to everyone who voted for my work and your continued support of my writing career and fragile ego. All three of the Asphodel novels have received a prestigious P&E award which, at least for a moment, makes me think I'm doing something right.
Which sets me up for this little tidbit. The Asphodel Cycle 4:Apostle of Asphodel will be released in May of 2009. It's the final installment in the Asphodel series, so if you haven't read the first three award winning novels now's the time to pick them up! That way you'll be ready for the final chapters in the story of Tamsen and Brial.
Once again, thanks for your votes and your love of my work.