I can't believe it.

Prince was an integral part of my growing from adolescence into womanhood--an independent musician intent upon having his own way, creating music no one else had ever thought of, and riding the charts to unbelievable popularity. 1984 was the year of Purple Rain--my senior year in high school/first year of college. Despite the earlier songs I was familiar with, Prince was an enigma to me, a punk girl trapped in the country music of the Deep South. Purple Rain was an awakening for me musically--a conceptual album that told a story, but not as high brow as Bowie or as insistent as Pink Floyd.

And that story was the kind of thing important to a 17-year-old girl. His music spoke of emotion and sex and violence, wrapped in the imagery of a novelist and the words of a rebellious poet. He wrote songs about things that no one else dared to--Darling Nikki, anyone?

Prince was the anti-Michael Jackson--an artist of color who didn't give a rat's ass what anyone thought about the fact that he was five foot nothing, wore high heels, and dressed like a New Romantic. He was a virtuoso musician who could play multiple instruments, and one of the best guitarists in music. His voice was unbelievably rangy--a full FOUR octaves plus four or five additional notes surrounding his natural baritone.He created an iconography around himself that even in an era where all the great musicians were doing that, his stood above the others for its sheer audacity and playfully malicious message. His sexuality was endlessly debated--and yet, no one had any doubt that if you pissed Prince off, he would kick your ass.

And then run over you with his souped-up purple motorcycle. 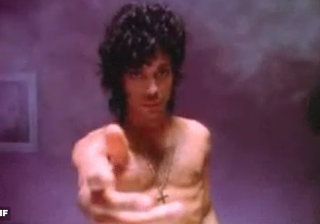 He was an androgynous bad ass, whose work as a producer was almost as revolutionary as his music. He brought us one of the great party anthems of all time thanks to his introduction of Morris Day and the Time to the world, and one of the greatest love songs and vocal performances ever with Sinead O'Connor's version of Nothing Compares 2 U. Hell, we wouldn't have text-speak if he hadn't done it first.

He took a stand against the big record label who'd tied up the rights to his music, and emerged as "the artist formerly known as Prince"--a stand that might have ended up killing another musician's career. Two years ago, he won the rights to that music back, effectively bringing Warner Brothers to their knees after he'd termed their contracts "slavery" two decades before. And then he triumphantly re-signed with them, having regained the rights to his entire catalog.

Prince was a legend, and became one very early on. I respected his independent spirit, his fearlessness in standing up to a corporate giant, and the poetry infused into every lyric he ever wrote. My kids grew up hearing Purple Rain and Controversy. Bowie they liked; Prince, they loved.

That summer of 1984, I was driving home from work and When Doves Cry was on the radio. I was one of those sing along in the car kind of kids. I had an orange VW Bug that I loved, and driving through Clarksville, Tennessee with the top down and Prince cranking on a hot summer's day was a pretty awesome feeling. When I got home, surprisingly, my mother was waiting for me. I instantly tried to figure out what I'd done to get into trouble, and then she told me that my best friend had been killed in a car wreck that morning.

I'd talked to Tammy on the phone the night before. We had big plans for college--after years of debating against each other for different high schools, we were at last going to be debating together on the same team. We were excited, because fall semester was only a few weeks away. I'd known Tammy since we were both toddlers. She and I lived five houses apart back then. Her death was the first tragedy to ever touch me that closely.

And ever since, When Doves Cry has inextricably been associated with her death in my mind.

That summer and fall, I played Prince's Purple Ran album over and over. When Doves Cry might have been tied to death for me, but the rest of the album was exuberantly, vibrantly, sexually full of life and the joie de vivre that Prince's iconic album exuded. It helped me cope with loss, and taught me that all the changes a teenager undergoes are an essential part of life--not wrong, but defiantly normal and oh-so-right.Living in the same state as the hypocritical Tipper Gore and her stupid parental advisory labels on music (and now video games) made his defiance of society's "acceptable" norms even more impactful--and taught me as a writer to push the boundaries myself and to seek the rarer paths in my work

An important lesson, for something that was "just" pop music.

So today, after losing David Bowie and dealing with his incredible self-designed epitaph, after losing an icon of country music in singer-songwriter Merle Haggard (not my cup of tea, but what an incredible story and human being he was)--now we must confront the horror of a world without Prince.

I am a child of the 80's. The pop culture of that decade has influenced my taste as an adult, for good or for ill. Music is what taught me to be a rebel--and that rebellion is epitomized in two artists: David
Bowie, and Prince.

I'm sure somewhere, among his things or upcoming music, Prince has composed his own epitaph. But if he hasn't, that's all right--because he wrote it thirty years ago.

There is no doubt about it. 2016 is the year the music died.