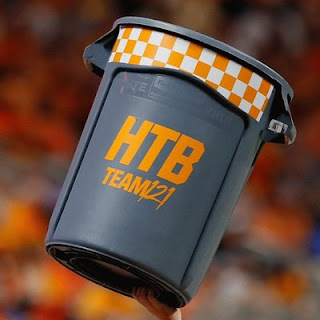 You know, I've enjoyed a Butch Jones-free life. It's been pleasant. No stupid gimmicks. No lies. No BS. But now that we're looking at the meat of the football season and the football coaching carousel is about to start up again, some benighted folks--and journalists--are going to do exactly what Scott Roussel did in his column today for FootballScoop.com. They're going to look at Butch Jones as a viable option for a major football program, especially now that Nick Saban has applied a bit of shinola to disguise the you-know-what that's currently "interning" at Alabama so he can milk every drop of cash out of the University of Tennessee.

And Scott Roussel, the president and owner of FootballScoop.com, thinks that Butch Jones should be a head coach again.

For someone who states emphatically "Butch Jones will be a head football coach again", I have a lot of questions. First off, has no one at FootballScoop been paying attention the past few years? Did you just miss everything that happened since 2015? Since that seems to be the case here, let me help you guys understand why Rousel's column was so ill-advised. Let's take a look at why the last man in America who should be permitted to be the head coach of any football program is Butch Jones.

You know, Scott...Butch doesn't seem to be all that impatient to get back into coaching. He's content with bringing Saban his coffee and polishing Bama helmets for $35k a year...and so would I be if I had a $6.82 million dollar buyout.

Stop and think for a moment. Does it seem like he's chomping at the bit to get back on the field?

No, and there's a reason for that.

In order to start the new con game, you have to make sure the previous one is forgotten. You know, the one where every year of Jones's tenure at UT there were 25-35 players on the injury list by mid-October, leading directly to those end of season collapses of extremely talented teams.

Many of those most promising players, the 4- and 5-star recruits Scott was drooling over now no longer play football at all. On any level. Why? Because the Volunteers football program was abusive under Butch Jones. He overruled team physicians and forced injured players to go ahead and play anyway. One of the best examples of this occurred during the 2016 Tennessee-Texas A&M game. Eight players went down in the game.

Some never came back. Many of those departed players cited the verbal, mental, emotional, and physical abuse they endured under Butch Jones as the reason for their departure.

You think parents want to entrust their 5-star players to a coach whose primary concern isn't their son's health and safety? It doesn't matter if the recruiting classes were great if those players leave mid-career and go somewhere else.

Or lose their future in football entirely.

Players have reported that they were used like gang members to keep other players in line. Some players who demonstrated too independent a thought process when it came to the health and safety of their own bodies were jumped on the practice field by his teammates while the head coach stood there and watched it happen. In fact, the head coach had ordered it to happen, like a Code Red from the play/movie A Few Good Men.

Think that's a great look for your program?

Think...really think about that 2016 season, when Tennessee started off ranked in the top five in the preseason. Over the span of thirteen months--from the kickoff of 2016 to Butch Jones's firing in October, 2017--the Vols went from top-five, to a 9-4 season record, and then, incredibly, to the basement of everything with a 4-8 record in 2017. The first time in UT's history that the school was winless in the SEC, and a full one-third of the team had either left the program or were out with injury by mid-season for the third season in a row.

Not a great job of research there, buddy.

Why is it that the University of Tennessee led the nation in transfer requests for several years? Think that speaks highly of Butch Jones's treatment of players?

Think it speaks highly of his active obstruction in those requests, costing players not only time on the gridiron but time getting their educations? Many former players reported having their transcripts blocked and their eligibility as well for several years after leaving UT.

What good were all those top ten recruiting classes then? Matriculation doesn't result in a collapse like that. A coach's primary job is to make certain that the team has the right elements in place so the turnover between upperclassmen to underclassmen is seamless. But that didn't happen at UT.

Why is that? It doesn't matter how great a Vols recruiting class is if the majority don't play for the entirety of their collegiate career at UT. Florida had a top ten recruiting class this year and lost many of those players before the season started. Did FootballScoop cover that?

Everyone else did, and seemed to agree there was something wrong with the program in order for that to happen. Why wasn't the exodus of players from UT  given the same scrutiny? Did you cover that?

Did you even know?

Why is it that through Butch Jones' five-year tenure at UT, the Vols consistently collapsed after three quarters only to lose the game in the final minutes? Abysmal coaching decisions.

Why is it that the most loyal, steadfast fan base in America rose up in rebellion against their own school, forcing the firing of Butch Jones and a few weeks later that of then-athletic director John Currie? Does anyone with a functioning brain really think that was just an uneducated mob of fans raising hell for the fun of it?

I hope not. It's never a good thing to insult your target market. Just saying. The uprising was spontaneous but it was also focused and well-directed, resulting in an event unprecedented in college athletics. That entire fiasco in the fall of 2017 originated with Butch Jones.

So answer me honestly: why is it that anyone, athletic director, fan, or sports journalist, would want to bring such a toxic element into their own football program? Oh and by the way, we're not just talking about Tennessee here. Maybe you should dig into what happened at the University of Cincinnati during Butch Jones's time there while you're at it, Scott.

Butch Jones left the University of Tennessee an absolute disaster between craptastic athletic training, the abuse and torment of his players, the exodus of talent from Rocky Top, and ruining the lives and futures of multiple great players. and one of the most humiliating episodes in sports history If Butch Jones legitimately had something to offer another program, he'd already be riding the coaching carousel (like Urban Meyer already is) and selling himself (again) as the once and future king of great football.

But he's not. He's grinning like an idiot down in Tuscaloosa, acquiring that Alabama mystique while he milks the university whose football program he ruined of half a million dollars a month. He's not pimping himself because he intends to get every penny of that $6.82 million dollar buyout, thumbing his nose like a child from his bolt hole in Tuscaloosa.

After what Butch Jones did to the University of Tennessee, its fan base, and its athletes (which is the most important of the three) he should never be allowed to set foot on any football field in a position of authority ever again. If some poor wretched school does bring Butch Jones in to "turn around" their program, they are placing the eighty-five young men on their roster in the path of physical, educational, and financial ruin. Period.

And those are the facts.

I'd recommend you read two books that detail what was happening at the University of Tennessee football program, Scott. Maybe pass it along to your colleagues there at Football Scoop too. Pick up Mark Nagi's Decade of Dysfunction, and you'll get the background of the last ten years of horror on Rocky Top.  Then grab a copy (I'd be glad to send you one) of Empowered: The Fan ReVOLution That Changed College Football by UT Vol historian Tom Mattingly and Celina Summers.

Read the interviews with players, alumni, boosters, UT officials, and fans. Actually learn what happened under Butch Jones before you start lauding him as a potential head football coach at some other school.

Suggesting Butch Jones be hired to coach any level of football is the equivalent of handing a suicidal person a loaded gun and dropping them off somewhere in the middle of nowhere. A responsible person would never consider doing such a thing.

Be responsible, and learn exactly what you're suggesting before you put it in print. At the end of the day, you're recommending that some other school lose its legacy and self-respect. But you're also recommending that a serial abuser be given exclusive access to the lives and futures of more young football players.

Is that really what you want to be known for? Are you sure? Because if he is hired somewhere and more of the same happens, you'll bear a measure of responsibility for it. You may be one of those journalists who sat on his self-proclaimed throne when UT fans revolted and condemned us as ignorant, uneducated, ill-informed and so forth. I don't really know; I don't really care. But what I do know as a long-time writer, editor, and publisher is that you need to know what you're talking about before you put it down in print. And in this case, you patently had no clue what the reality Butch Jones created really was.

You should have known better than to be this irresponsible. You should have known to check out the facts. After all, you own FootballScoop, right? And you were a VP at the Shaw Group, a Fortune 500 company dealing with road construction, for eight years, right? You understand at least the concept of journalistic and corporate responsibility. Or, at least, you should.

But you didn't. That's the real football scoop here. Just...think about it.
on September 17, 2019 No comments: