All right--let's start off with a healthy dose of reality here and clear the college football issues out of the way.

I do not care which school it is. I'm not 'anti-Baylor'. The university I am loyal to with athletics is also under an investigation and has been sued under Title IX for 'creating a culture that promotes rape'. If during the course of that investigation the University of Tennessee is found to have created that alleged culture, my narrative in this blog will not change one iota and I will DEMAND that any UT official that participated in or colluded with the deliberate protection of star athletes, the shaming and ignoring of victims, and selling their souls to win football games like Baylor obviously has, should be IMMEDIATELY TERMINATED and subject to criminal prosecution to the fullest extant of the law.

And if that loses me some followers from Vol Nation, that's just fine by me. You can read the Pepper-Hamilton report about the Baylor situation here.

However, all that being said, the allegations involving sexual violence and college athletes isn't the problem. It's just a symptom of the problem, which extends far beyond the athletic department and touches every single university campus in the United States.

College campuses are a happy hunting ground for sexual predators, and overall universities are at the very least dilatory and frequently delinquent in working to solve this problem. According to the US Department of Education in 2015 (Huffington Post, July 25, 2015):


The U.S. Department of Education’s Office for Civil Rights is investigating 124 colleges and universities and 40 elementary and secondary schools over how they have handled sexual assault among students.

As of July 22, the federal agency was conducting 140 investigations at 124 higher education institutions for possible violations of Title IX in their handling of sexual assault, according to information the Education Department provided to The Huffington Post. Meanwhile, 41 similar investigations are taking place at 40 local K-12 schools and school districts.


And then from Know Your Title IX, an informational website educating students about on-campus sexual violence, this litany of disturbing statistics on gender violence:

Approximately 19% of women will be sexually assaulted during their time at college. (Study published in 2007)

The Massachusetts Institute of Technology’s campus climate survey (which measures prevalence of and attitudes toward gender-based violence) found that 17% of female students had been assaulted while enrolled. (2014)

But that's not all:


5-6% of men will experience sexual assault during college.[1]  (2014 and 2007)
90% of campus sexual assaults are committed by perpetrators that the survivor knows.  (2000)
84% of female survivors report being sexually assaulted during their first four semesters on campus. (2007)
The majority of undetected college rapists are likely serial perpetrators, committing an average of 6 rapes each. (2002)
13% of women report being stalked during their time in college.
80% of survivors of stalking know the person who victimized them.  (2000)
43% of dating college women report experiencing violent and abusive dating behaviors including physical, sexual, technology-facilitated, verbal or other forms of controlling abuse. (2011)
More than 57% of college students who report experiencing dating violence report experiencing it while in college. (2011)


And let's be real here--these are older numbers. The most recent numbers are even more disturbing. The National Sexual Violence Resource Center reports this for 2015:

63.3% of men at one university who self-reported acts qualifying as rape or attempted rape admitted to committing repeat rapes


Those last two figures are the ones I want to concentrate on for the moment.

NINETY PERCENT of victims DO NOT REPORT THEIR ASSAULT. The National Domestic Violence Hotline Law Enforcement Agency Report reported in 2015 some reasons for this issue:


And for the idiots who called in to the Paul Finebaum Show this week talking about "how many times the alleged victims made false reports of sexual violence" ponder on this False Allegations of Rape Study that provides analysis of ten years worth of reported rape cases at an American university for a moment:


Of the 136 cases of sexual assault 8 (5.9%) were coded as false reports, 61 (44.9%) did not proceed to any prosecution or disciplinary action, 48 (35.3%) were referred for prosecution or disciplinary action, and 19 (13.9%) contained insufficient information to be coded (see Table 2). It should be noted that in no case did the research team “override” the classification of a false report made by the police department. The eight cases that were described as false reports by the police investigators were also categorized that way by the coders.

So yeah, you moron with the 'false allegation' and 'cleat-chasers' comments. You are reading that correctly. 5.9%. Some additional data: 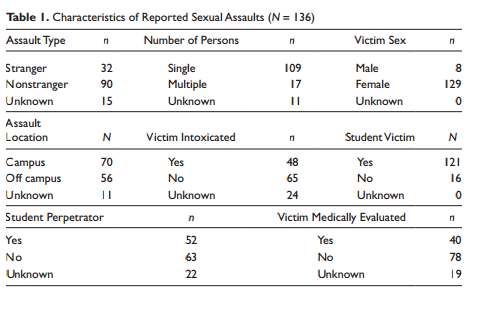 Let me be perfectly plain here. Yes, what happened at Baylor is absolutely atrocious and unconscionable. But that's not the entirety of the problem. Like the iceberg that sank the Titanic, 90% of the problem is hidden from view.

We have held a societal ideology for--well, pretty much EVER--that blames the VICTIM of sexual assault rather than the PERPETRATOR, an ideology that is borne out in the modern day by victims who are unwilling to expose themselves to the 'she was asking for it' tactics used still by some defense attorneys, the indifference (or in Baylor's case, collusion) of law enforcement to assist victims and protect then during the investigation of sexual crimes, and the mythology that women falsely accuse their attackers in order to cover something up or retaliate against someone.

THAT is the problem with sexual assaults on college campuses, and it is universal. And while Baylor is dominating the headlines, schools with the same issues and no ostensible athletic department involvement are dealing with the same issues and are NOT getting the same media attention. If we're just talking about Title IX complaints, then we need to consider athletic departments more specifically: 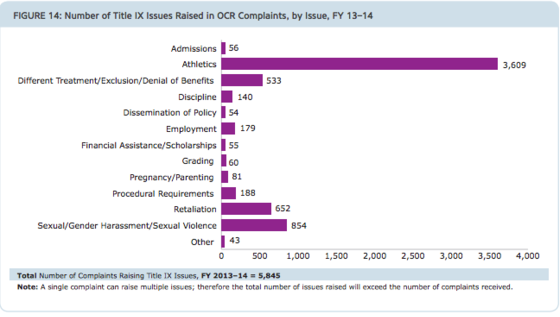 But again--Title IX does not equate the REAL problem, which is sexual violence on college campuses. It is just a symptom, like athletes as alleged perpetrators is legitimately represents just a fraction of sexually violent offenders at US colleges. And even though Baylor is scrambling to preserve itself with a rash of firings and 'reassignments', I have to ask--what are they doing to resolve the issue they share with every other college in the country?

What steps are Baylor or Tennessee or 124 other institutions taking to end sexual violence on their campuses?

That's the question that we, as students, parents, educators, and taxpayers need to be asking--MUST ask if we're going to really take a stand on sexual assault. We must DEMAND that law enforcement actively investigate EVERY sexual assault equally, without consideration for the power a university wields in the community. And we must broaden the scope of our inquiries to the universities even where the athletic department is not the focus of these claims.

And you, as an individual, need to check this list. See if your university, alma mater, or a state school your tax dollars fund is on this list--a list I would normally never post on a blog because of its length. If your school is on this list, then you must pursue the truth in these claims as strenuously as possible, because it's your duty, my duty, our duty to make certain that we do. 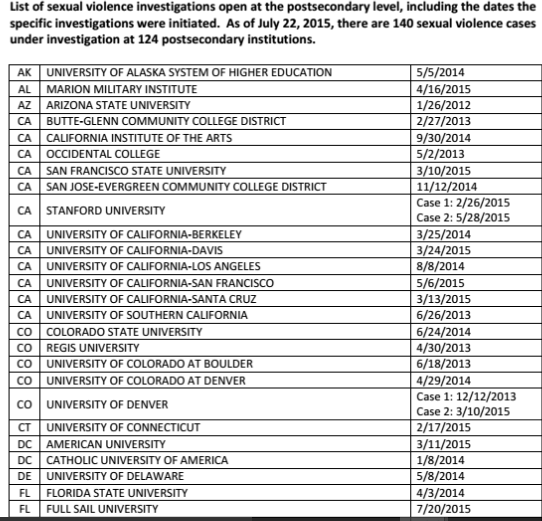 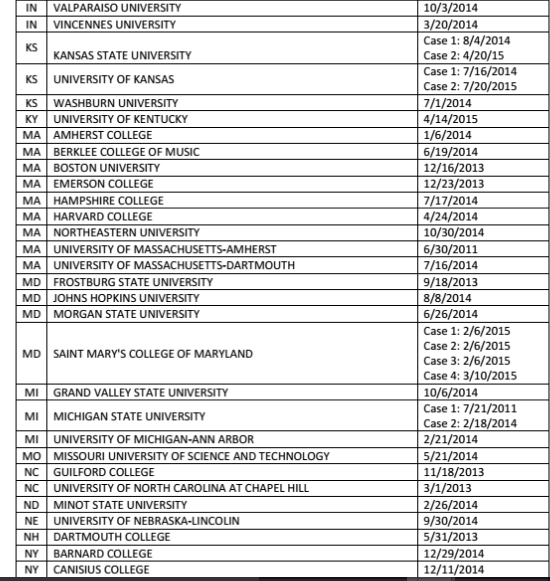 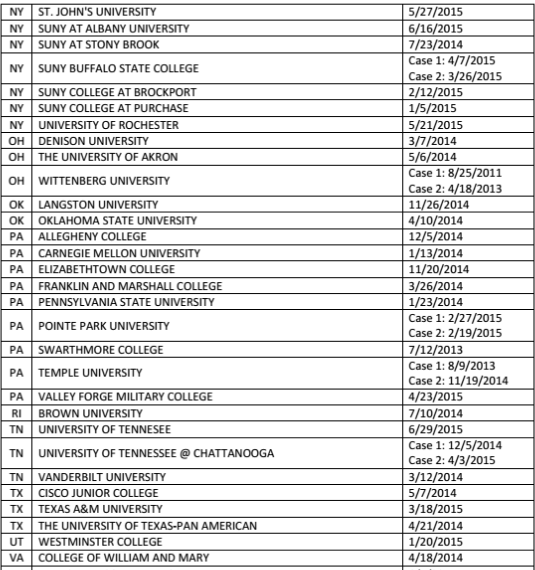 As I said. Normally wouldn't post a list this big, but this list MUST be posted because it demonstrates the scope of the problem much better than I could. So I have to ask you--how many schools are on this list that you are associated with?

Time to ask some questions, my friends.

There are a lot more questions you should ask. These will do for a start. It's my opinion that no matter what university you ask, not all of these questions will be answered to your satisfaction.